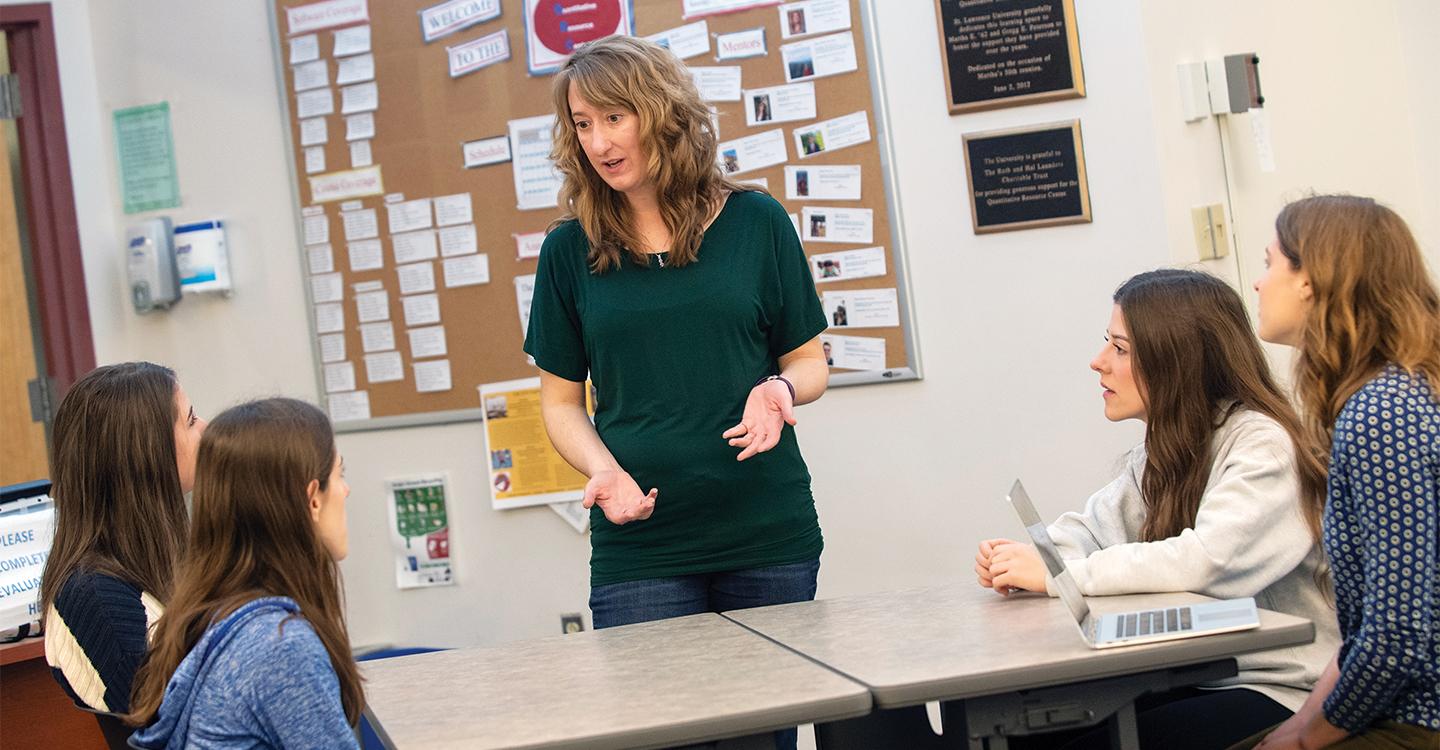 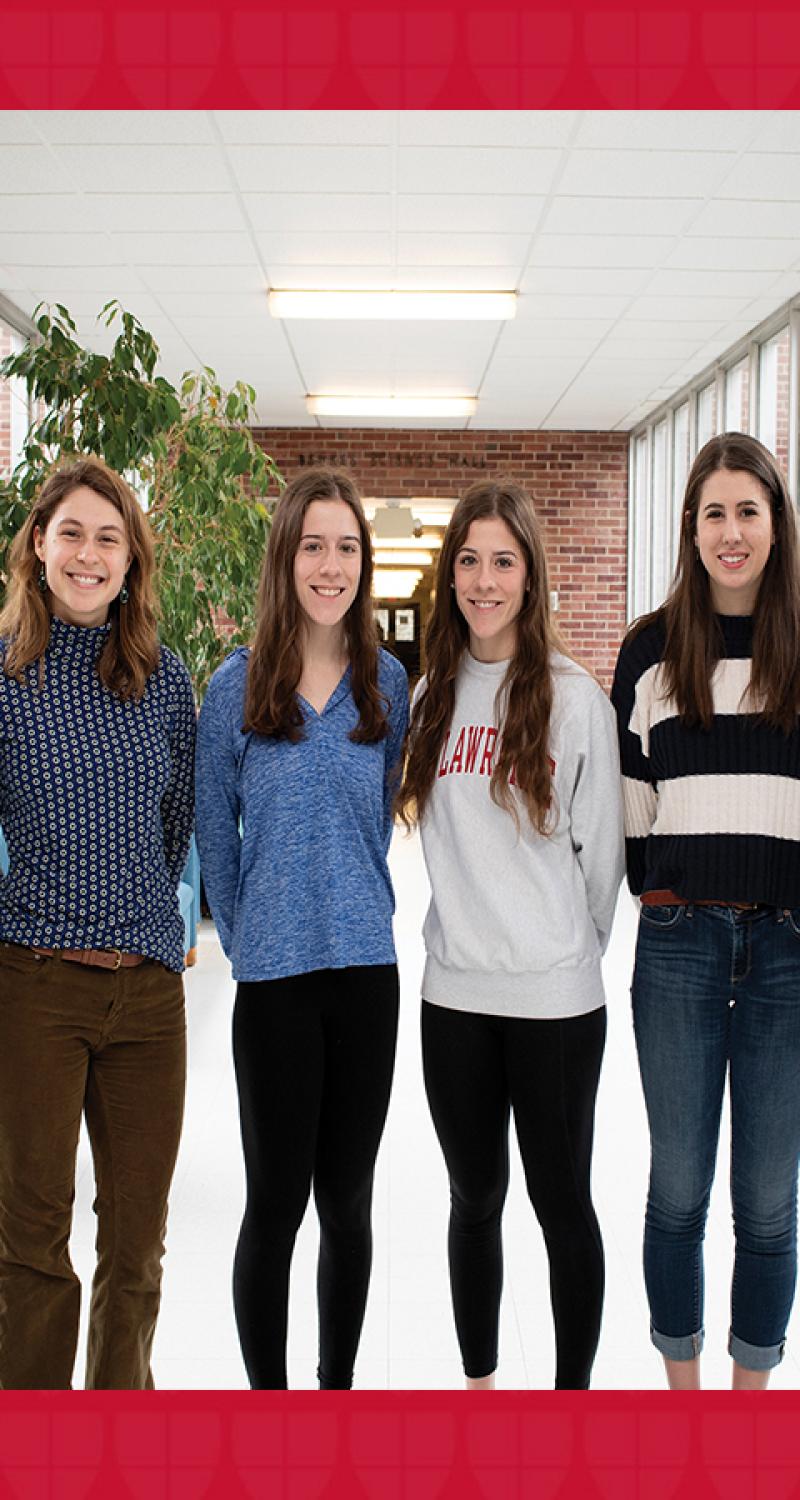 We set out to advance science and help all our students become better scientists. In this environment, we’ve seen great achievements made by both men and women. Now, more Laurentian women — faculty and students — are working in the physical sciences and they’re earning the kind of recognition that funds more research.

It is women who recently earned more than half of all St. Lawrence degrees in the physical sciences: math, physics, computer science, geology, statistics, and chemistry.

It is women, however, who are often under-represented in these disciplines — at the highest levels of academia and in private-sector careers — throughout most of the U.S.

It is women who are eligible to receive the Clare Boothe Luce Undergraduate Research Awards (CBL URA).

These are among the most prestigious and exclusive grants awarded in the sciences. Each year, only a handful of universities receive these grants.

It is St. Lawrence that is one of the recipients this year.

“Lots of Laurentians become scientists,” Jessica Chapman says. “This is one of our strengths.”

She’s an associate professor of statistics and the Grace J. Fippinger ’48 Professor of Sciences.

“This puts us in a great position to mentor women and men and help them succeed in these fields,” she says.

This is one reason the Henry Luce Foundation named St. Lawrence a recipient of the Clare Boothe Luce Undergraduate Research Awards. According to the foundation itself, the grants are specifically aimed at providing experiences for women in fields where there have been various obstacles, professional and personal, to their advancement.

Chapman adds, “Working together as faculty and students, we overcome those obstacles and increase the number of women working in the physical sciences.”

She says the University’s strong record of undergraduate research, through the St. Lawrence Fellowships program and others, was another factor in the Henry Luce Foundation’s decision.

“We have demonstrated our ability to mentor undergraduate research projects,” Chapman says, “and our science programs create more opportunities for students to do research. The Clare Boothe Luce Undergraduate Research Awards are exactly that: they’re a tremendous opportunity.”

The grants provide funding that allows students to complete eight weeks of mentored research on campus during June and July. The students also receive the funds they need to present their work and findings at a national conference.

The CBL URA also covers the cost of pairing each student recipient with a St. Lawrence alumnae who is already working in the student’s field of interest.

“I think the strength of our alumni network and our alumnae who are eager to take on these mentoring roles helped convince the Henry Luce Foundation to name St. Lawrence a recipient this year,” Chapman says.

Research has shown that this is highly beneficial for students, particularly those from under-represented backgrounds.

“To have a network or constellation of mentors that have different resources, skills, and experiences for the student to draw on,” Chapman adds, “helps guide them through their undergraduate academics and on to graduate school or the workforce.”

This Is How We Change the World

Nicole Panek ’20 is one of the five Laurentian recipients of the Clare Boothe Luce Undergraduate Research Awards. She’ll use the grant to further her research on artificial photosynthesis.

Capturing solar power now usually requires using it right away or storing it in complicated and expensive batteries. Artificial photosynthesis aims to make energy from the sun cheaper to capture and more efficient to store.

At its simplest level, this is the chemistry plants do: turning small molecules from their environment, like water and carbon dioxide, into complicated things like sugar or wood. Capturing and storing sunlight all happens in the tiny space of a leaf.

Artificial photosynthesis, then, is the attempt to replicate the chemical process plants use, but get different kinds of fuel, like ethanol or gasoline, that could run our cars, homes, and everything else.

Done correctly, making and burning this fuel would emit no new greenhouse gases. Panek’s research is an attempt to figure out the chemistry and mathematics to make it happen. She’s working with Adam Hill, a St. Lawrence associate professor of chemistry, and their work is both highly technical and promising.

“We’re trying to capture sunlight,” she says. “That light excites electrons that convert carbon dioxide and water into usable energy. To trigger these reactions, we have to fuse two kinds of metal on a surface made of silica nanoparticles [a mix of silicon and oxygen, essentially glass]. If we can understand the inner workings of the silica and why the metals react the way they do, we can make artificial photosynthesis — as an energy source — more efficient.”

Right now, she adds, the scholars working on this face a big problem: it is extremely difficult to know how that silica surface will react.

“It is possible, though, to use a theoretical model that can predict how the silica will react,” she says.

This is why Panek, a math major, is also enamored with chemistry. Yes, enamored:

“I love the applied mathematics associated with theoretical chemistry,” she says. “My research involves using graph theory to model the structure of silica. This includes calculating the likelihood of finding the actual structure of the silica material itself. If we can do this, we can identify its energy signature, or how it will react.”

This summer, the Clare Boothe Luce Undergraduate Research Awards will allow her to delve more deeply into this research.

“These grants will provide the funds and housing to work on campus,” Panek says. “I’ll have access to the University’s high-performance computer, which we need to conduct this research.”

As a CBL URA recipient, she’ll also have the financial support to share her findings at the St. Lawrence Fall Honors Reception and the fall New York Six meeting as well as contributing to Professor Hill’s published findings.

“I’m particularly excited about being matched with an experienced scientist now working in the field,” she adds. “As a math major, my approach to theoretical chemistry is not typical and I greatly appreciate the advice of someone with more experience.”

This speaks to the power of Laurentian connections: the recognition that we are all part of a sprawling network which can open doors to internships, graduate schools, jobs, and opportunities of all kinds.

It is a “Big Idea” and priority of The Campaign for Every Laurentian, the biggest fundraising effort in the University’s history. The Henry Luce Foundation grants will help our faculty and students, but there is more to do.

Each of us, together, can support the important scientific work happening now at St. Lawrence.