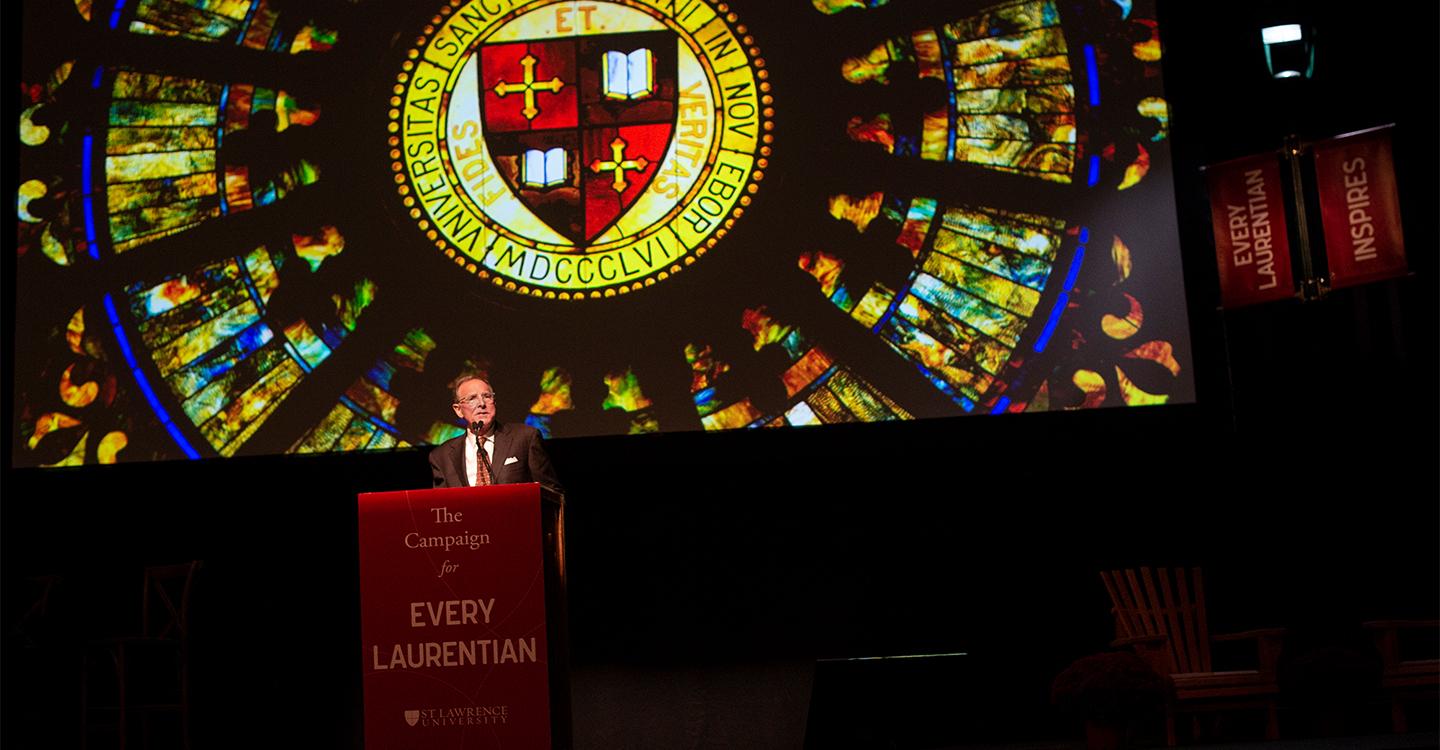 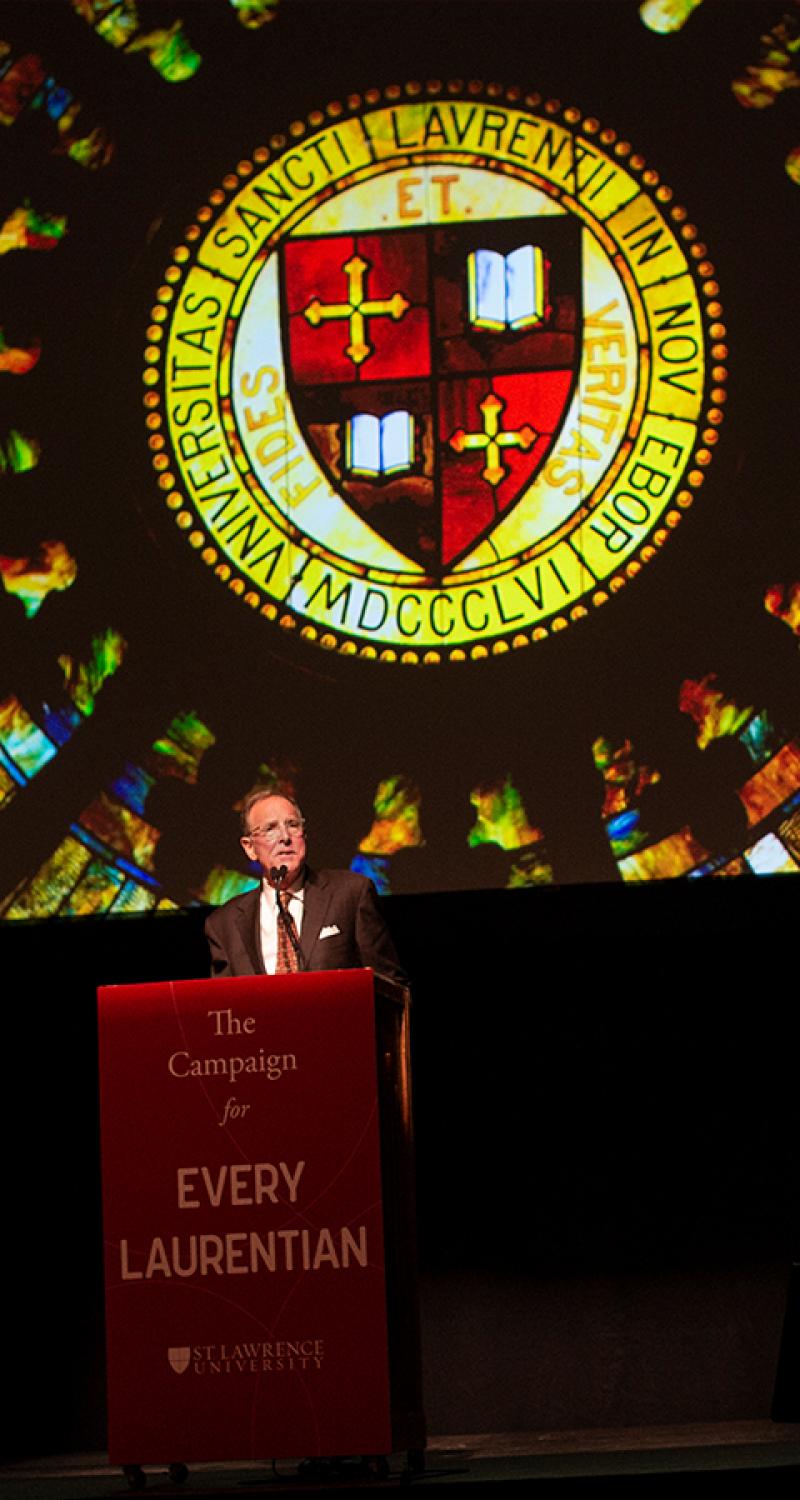 The Power of Small Moments

The Campaign for Every Laurentian Launch Remarks, October 26, 2018

Small moments often provide big insights without being reduced to some single grand principle trying to explain everything. My own small moment was when I was 16 years old and I went to our family minister for advice about college. He mentioned three or four liberal arts campuses without ever saying a word about his own alma mater. So, I bravely asked him, “what about St. Lawrence?—I’ve heard you talk about St. Lawrence all my life.” He grinned a knowing half smile and let drop, “You might like it there.”

I’ve come to St. Lawrence twice in my life, almost by accident it seems, never having imagined in either instance that it would become a defining home place. A small moment like my own has been multiplied in other lives countless times creating the saga and genius of belonging as one among every Laurentian.

The origin, purpose, and plan of the Campaign for Every Laurentian emerged naturally as small moments, brief conversations among hundreds of people from all over the American continent. Nothing about it was preconceived or was brought down from a mountain-top. The big ideas that frame the campaign are best understood as the side effects of many small moments.

Our fundraising effort tonight is not being launched by the compulsion of an oversized and glorious strategy. Just small moments adding up in combination with shared feelings about what needs to be done. Our campaign is formed by what the philosopher Kierkegaard called a “passion for the possible.”

This is the heart of St. Lawrence’s persona, this infectious larger hope, an unadorned optimism that first caused about ten citizens of Canton, New York, during one of the most perilous decades in American history, to put a college in a faraway place. Somehow, they had concluded it’s just possible the world will one day seek its goodness and not find another one quite like it anywhere else.

I begin this happy moment by thanking the leadership demonstrated most visibly and most vitally by our Board of Trustees. Theirs is a magnificent act of faith, expressing its passion for the possible, that will inspire the opportunity for every Laurentian to join our singularly important cause. But I also begin this moment with a picture in my head of a special night from a long time ago in St. Lawrence lore. To have been there, even as a child, means that you would now be over 100 years-old.

A telegram was sent all around the country in the early 1920s, the text of which I found in the University Archives: “It was decided at a meeting of alumni representatives of the University held at the Plaza Hotel in New York on Tuesday evening, October 24, that arrangements be made for launching a million dollar campaign to secure funds for the further development of St. Lawrence University.” In that small moment, a turning point had been reached.

The previous six decades since its founding, less than the average human lifespan according to the Psalter, had traced a touch and go business. The Civil War, several deep economic depressions, the collapse of farm prices, the deflation of currency values, and two very expensive global wars were always in the background of a backwater college not yet established in its reputation.

And then, these North Country dreamers announce their passion for the possible and attempt to raise a million dollars, which was enough to build Gunnison Memorial Chapel, Hepburn Hall, Dean-Eaton Residence for Women, Brewer Field House, a home for the president, the Avenue of the Elms, and permanently endow three major professorships—with funds still left for the next major thrust of growing the student enrollment from 300 to 600. The university got a big bang for its first million dollars.

A few months after the telegram had circulated, before a large gathering at a dinner to launch the million dollar campaign, Owed D. Young rose to speak in the ball room of the Hotel Pennsylvania in New York City. Other banquets were held simultaneously that night with faculty and alumni gathered in the campus gym, also in Watertown, Massena, Schenectady, Philadelphia, Boston, Buffalo, Rochester, and Utica.

As you recall, Owen Young was a pioneer in the electrification of urban and industrial America. He began his talk by saying there were two great sources of power lying north of the Mohawk: one is the St. Lawrence River and the other is St. Lawrence University. As he explained, the river must be developed all at once, because “half a dam is no more reliable than half a dog.”

A college, however, cannot be developed by a single action. Rather, its outcome is a matter of “accretion and growth.” He went on to say that even if an infinite amount of money were in hand, a college simply could not be built overnight, not created in a year or a decade. All the land, laboratories, and libraries might be in place, but all together these would not produce a college. Why?

Young replied, because “the high spirit of sacrifice would be lacking—the accumulated traditions would not exist…there would be no depth to the picture—no perspective to it.” Today, we have in our care a college of tremendous depth in what it offers, traditions of inexhaustible affection, and the perspective of being among the best in American higher education.

The occasion that first named this university as a power to behold and reckon—an intellectual and spiritual power, the same particular power Henry Adams once noted in his famous essay “The Virgin and the Dynamo,” one producing kilowatts and the other inspiring the construction of cathedrals—is our equivalent declaration.

Even with a modern Army base nearby, there are still only two great powers in the North Country. The river is unceasing and the university runs like an ever rolling stream. For many of us who have known this good place most of our years, The Campaign for Every Laurentian will be the single most important work in our professional or volunteer lives.

There are three reasons why this work is uniquely important. First, the world needs St. Lawrence. We have had a tremendous influence on communities and careers, influence that is out of all proportion to our size and our resources. The world, in all its wounded and aching need today, seeks what we have and do. This impulse—of entering to learn and leaving to serve—drives our campaign. The world knows St. Lawrence and we owe that reality, that recognition, that responsibility, our tireless, best success.

Another reason this campaign must feel the pull of a St. Lawrence destiny is captured by an ancient saying found in both Greek and Roman literature. Ex Africa semper aliquid novi, which means “Out of Africa there is always something new.” This is what has been said for more than a century as a comparable truth about St. Lawrence. Out of this place there is always something new. The campaign is a commitment to the freshest, most differentiating possibilities for the liberal arts—attaching this habit of mind to the study of business, public health, museum learning, cognitive science, and creative human experience, such as artificial intelligence.

Finally, this campaign will answer a particular desire of Laurentians themselves to renew something deep within, deeper than the poets can touch. It is the natural feeling to tie themselves back to a personal anchor point that began in the individual human odyssey of leaving home. My thoughts tonight began with my own adolescent wonder and worry. When Kirk Douglas turned 100, already a man who belongs to the world, had seen everything in life, and was honored by his peers and nation, he told me “I want to see St. Lawrence one more time.” This offered me a clue that in every life, even a long life, a person continues to seek the reaffirmation of soul and self. It is to know again, as if it’s the first spontaneous awareness of identity, that a person who was once 20 never abandoned the prime moment of curiosity.

So long as there are graduates of St. Lawrence who want to see it one more time, our campaign, and all our eventual endeavors as a university, will flourish and never fail. We know here the power of a renewable spontaneity—it is the singing the alma mater in the open air of the quad on the afternoon that the refabricated chanticleer was lifted and fixed atop the spire of the chapel, the last small moment of repair from the blazing flames I saw at dawn; it is the hundreds of group pictures at the hundreds of St. Lawrence weddings; and it is the letter written and the tears of the reader upon the page when a student tells a former professor, you changed my life.

The Campaign for Every Laurentian comes to us not so much as a calling, but as a blessing. I cherish this enduring hope like the indelible blessings of the world’s best traditions:

May St. Lawrence believe its humility matters more than its genius

May St. Lawrence remain faithful to finding truth while staying true to its faith in the dignity of every human being

May St. Lawrence remember that ambition is only a bold pose without first understanding that little, unremembered flashes of kindness count for more

May St. Lawrence make ready the next generation in every practicality of living usefulness while allotting sufficient care of them in the deep down places

May St. Lawrence always sustain the small moments as its secret of success, for therein the biggest ideas are born.