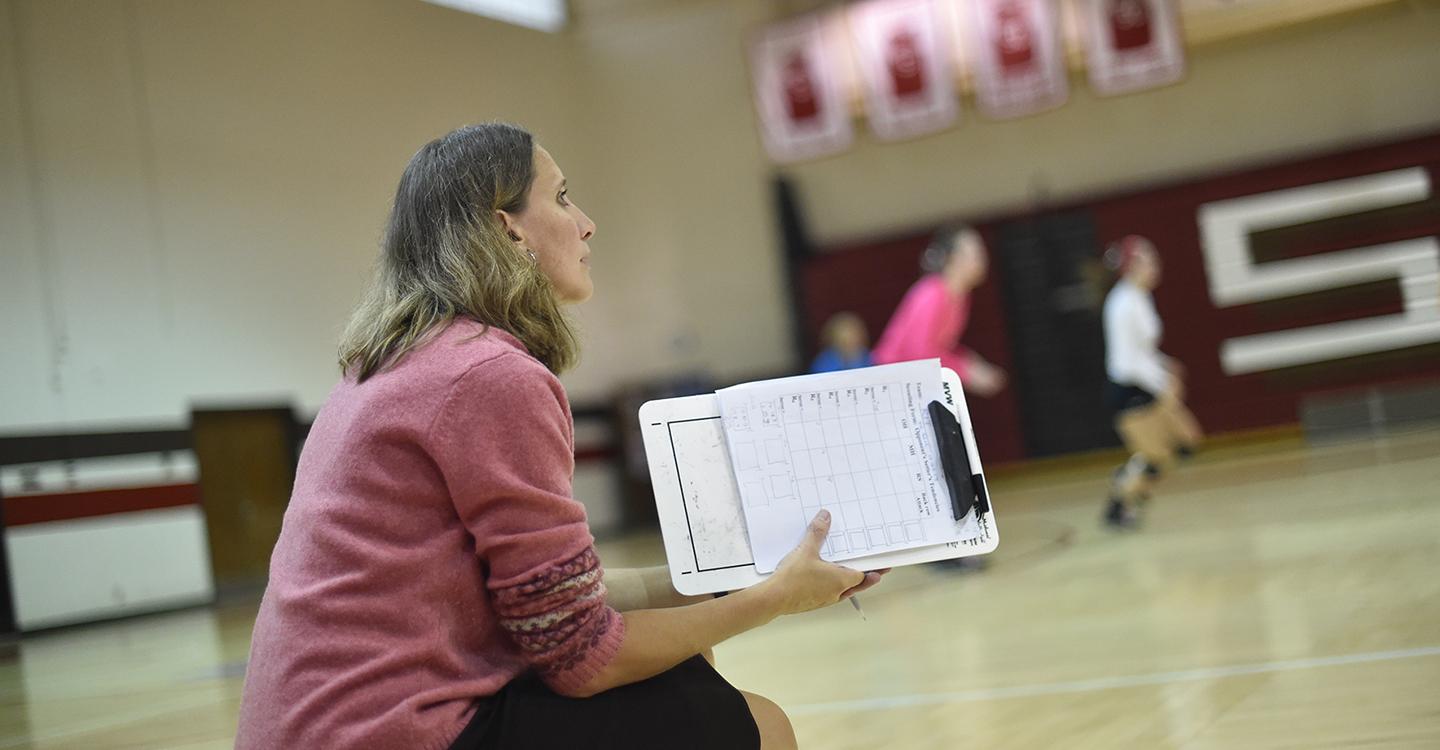 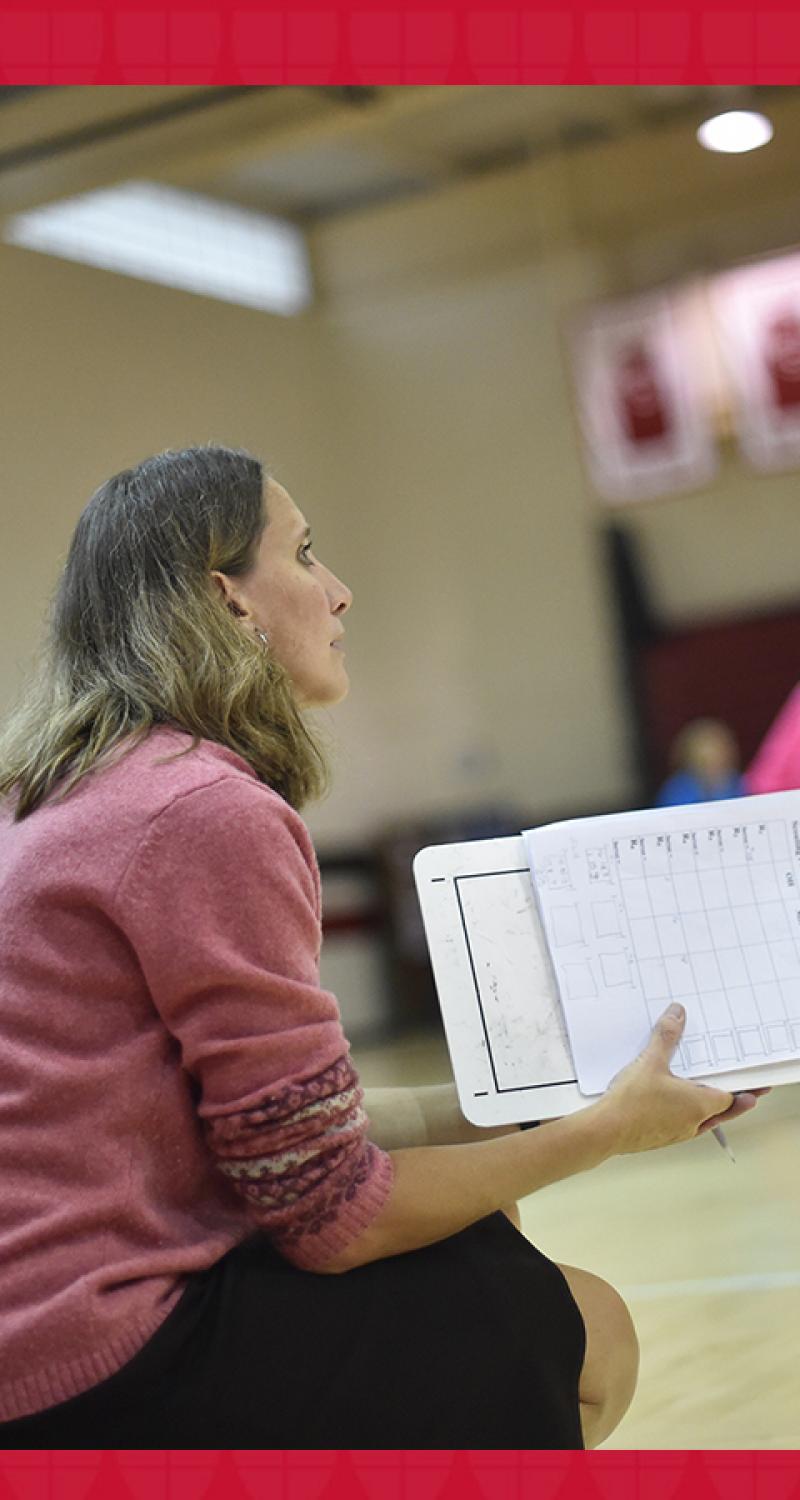 After spending the last decade building strong player connections as head volleyball coach and finding ways to give back to and connect with the local community, it’s not hard to find fans of Shelly Roiger.

I know because I am one of them.

Not many people are aware that, in addition to leading the Saints volleyball program, Shelly is active as a lector and Eucharistic minister at St. Mary’s Catholic Church in Canton and serves on the board of the Canton Free Library. She also has spent the last nine years volunteering with the Canton Hoopsters organization, coaching her sons’ youth basketball teams. My oldest son Charlie, now 12 years old, played on her fifth and sixth grade travel teams the last two years.

As a parent, I’ve never seen a youth coach so organized; her group emails to parents are legendary, and her insights are always spot on. The conversations I have had with her have helped me better understand what drives my son as an athlete, but more importantly, as a person.

It is no surprise that for the young women on the Saints volleyball team, Shelly’s coaching philosophy is crystal clear.

“We’re student-athletes and the student part comes first,” says senior captain Julia Wagner ’20. “And, yes, we’re also volleyball players. But we’re people before all of that. That’s what she cares about most, us as human beings.

Shelly, who just finished her 10th season with the Saints, works hard to connect her players to each other and to the community. This year, she had the entire team read and discuss the book Chop Wood, Carry Water by Joshua Medcalf during preseason to bring the team closer. She also makes sure that each year her rookies are adopted by “big sisters” to help them adjust to life on campus.

“If I didn’t have my big sister, I would have been completely lost,” says captain Natalie Piper, a sophomore from Honolulu, Hawaii. “It’s not just volleyball related things; it’s finding where your classes are going to be, and this is how you order at the Pub. Simple things, but you just have somebody there to make sure you’re going to be OK and you’re not going to melt down because you didn’t get the right Pub order.”

The team’s motto this season—“As One”—couldn’t have been more fitting as the Saints finished with 22 wins and earned a spot in the Liberty League playoffs for the first time since 2015. The players spend most of their free time together, going from practice and dinner to studying together as a group. In addition to connecting her players to each other, Shelly also spends a great deal of time figuring out what makes each and every one of them tick. She often makes suggestions to her players about what classes might interest them or what clubs they might be interested in joining on campus.

Shelly herself works hard to fulfill the team motto with her colleagues in the athletics department as well. For the past nine years, she has spearheaded St. Lawrence’s Power of Pink fundraiser, which has generated approximately $45,000 for the Gouverneur Breast Cancer Fund. As a colleague in the department and community member, I’ve seen firsthand how the impact of her coaching philosophy and involvement translates to building confidence in college and youth athletes alike.

On September 13, 2019, my son, along with his youth basketball teammates, came to Burkman Gymnasium to cheer on the Saints volleyball team in a match against SUNY Potsdam. They filled the stands bearing signs that read “We Love Coach Roiger” and, my personal favorite, “If you wanted soft serve, you should have gone to Dairy Queen!”

“They kept holding up more signs. It was so cute,” says Piper, whose teammates were not surprised by the gesture. “We told her, ‘Look behind you. Your whole fan club is here.’”