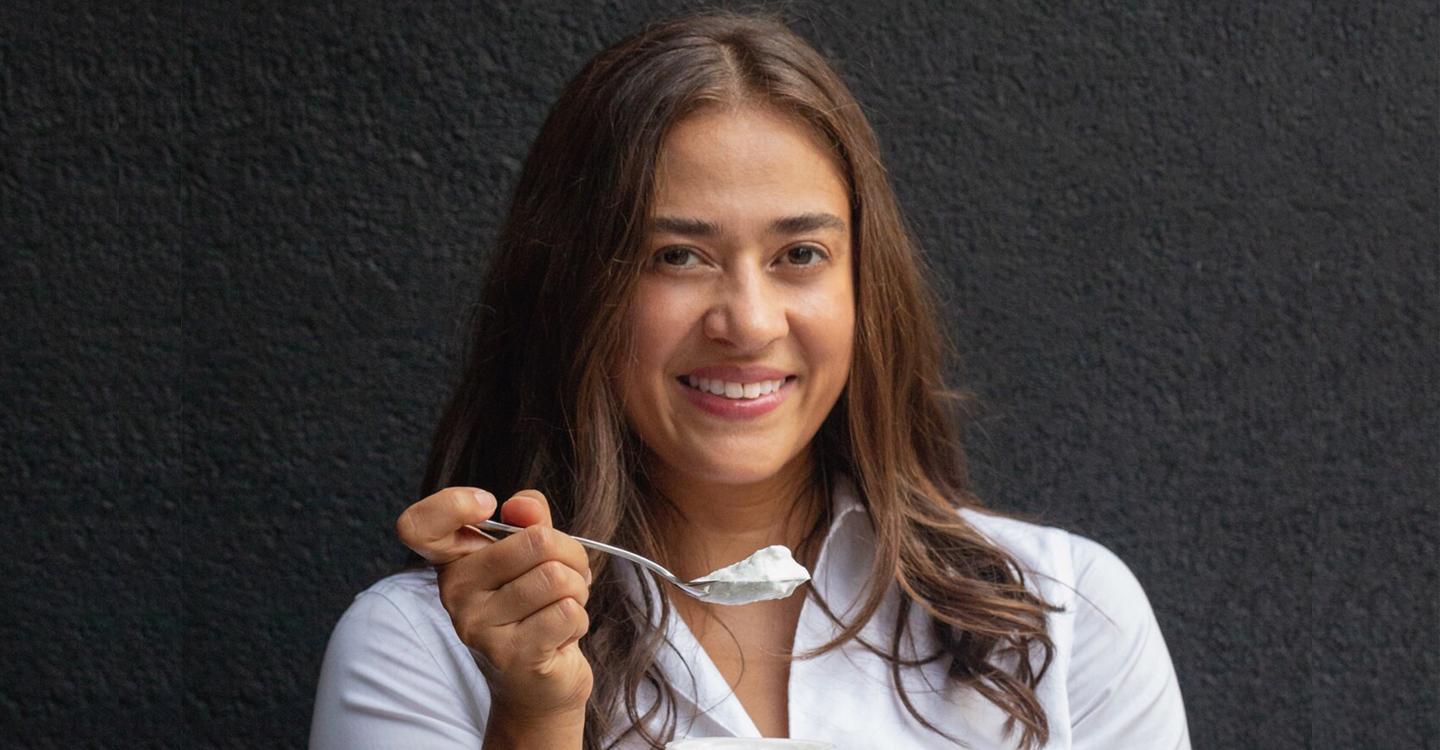 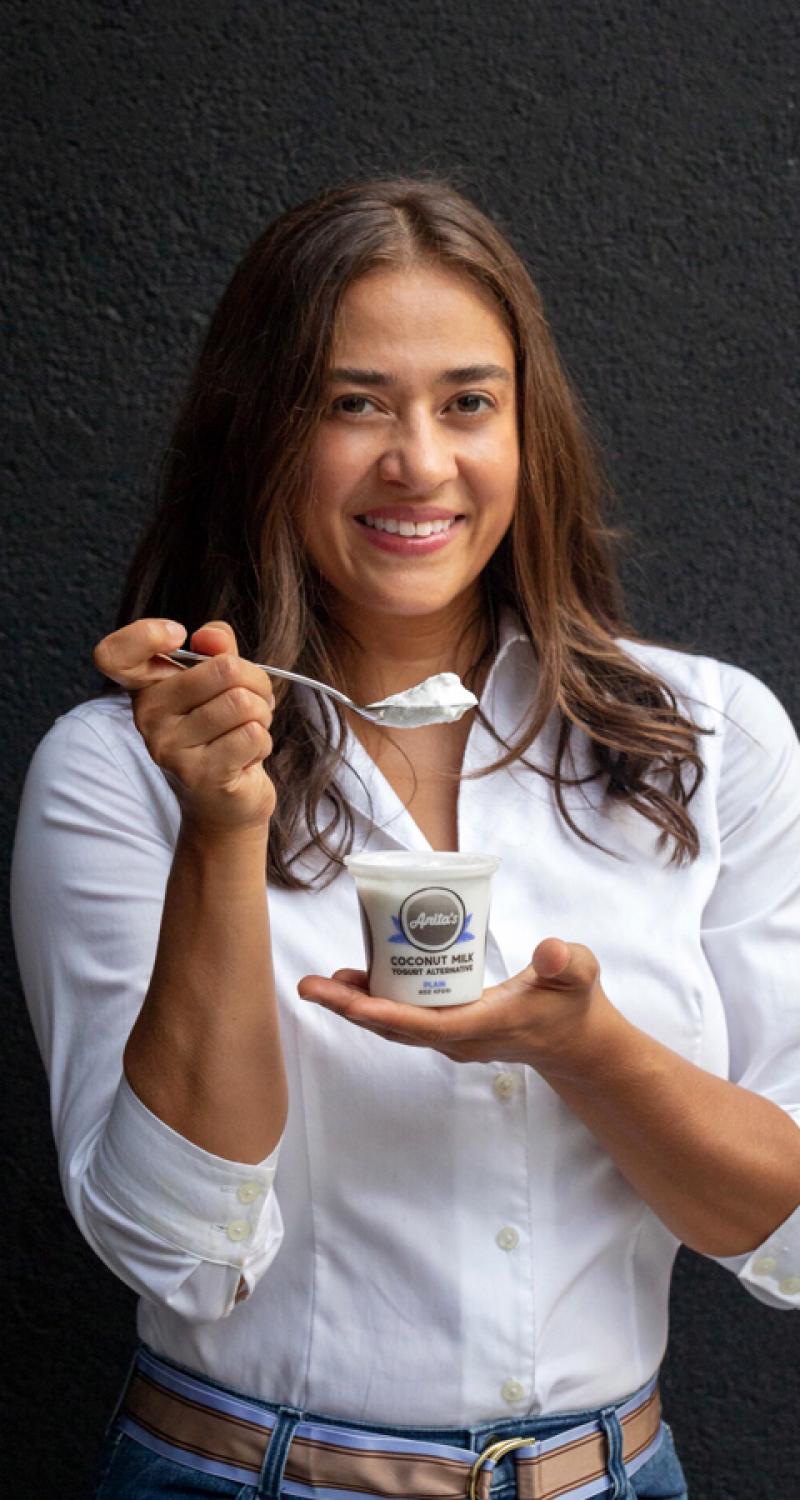 Making it Work: A Recipe for Success

Speaking from a warehouse in upstate New York, where she is expanding operations from a 200-gallons-per-batch production to a 1,000-gallons-per-batch operation, Anita Shepherd ’02 apologizes, “Yeah, there’s just no cell phone reception up here, really, so I have to get by using Wi-Fi.”

Making things work seems to be Shepherd’s forte. This is true, especially when it comes to developing and launching what started out as a five-client, custom-order, out-of-a-home-refrigerator coconut yogurt operation. Five years later, Anita’s Yogurt distributes thousands of gallons of product to 250 retail locations throughout the Northeast, mid-Atlantic, and Midwest—just one reason why Shepherd was selected as one of 10 Tory Burch Foundation Fellows in 2017, a platform for supporting women entrepreneurs.

In November 2013, Shepherd launched Anita’s Yogurts, a unique brand of coconut milk yogurt. The chemistry alone is a remarkable accomplishment. Shepherd managed to develop a proprietary recipe of four probiotic strains, a live-culture blend specifically for coconut milk. This blend is the only one of its kind, making Shepherd’s recipe the highest probiotic strain count in the non-dairy yogurt market.

Over the past two decades, New York has seen the explosion of yogurt production with corporate giants such as Dannon, Fage USA, and Chobani all expanding operations in the state. So how did Shepherd take her passion for food, a vegan lifestyle, and experiments in her small Brooklyn apartment and turn it into a unique business which is making new space in the very crowded yogurt industry? According to Shepherd, it may have all started when she failed Spanish at St. Lawrence.

“I really wanted to study abroad in Costa Rica, and St. Lawrence had a Costa Rica program,” says Shepherd. “Funny enough, I think I got a ‘D’ in Spanish right before I was supposed to go, and they’re like, ‘No. You’re not in the program anymore. You failed Spanish.’ I was so mad at myself because I’m Latina! My family is half Colombian.”

Despite changing course on her study abroad aspirations, Shepherd took full advantage of the liberal arts curriculum at St. Lawrence, taking courses in the arts, sciences, gender studies, and Latin American studies as well as getting involved in political and social activism on campus.

“I majored in biology, and I minored in both gender studies and Latin American studies. I was focusing on ethnobotany,” says Shepherd, who wanted to continue on to graduate school. “I got into a graduate program at Florida International University to continue studying ethnobotany,” she says, “and again, I failed.”

After scoring poorly on the graduate entrance exam, Shepherd planned to reapply, but as she puts it, “In the time that I was supposed to be studying to take the GRE again, I got interested in food and really interested in cooking. And, that’s when I started working in restaurants and developing recipes and informally catering parties. That’s how my whole path towards becoming a food entrepreneur started.

“The first job I had in food was working in a bakery called Batch in the West Village,” says Shepherd, who snagged a job with Pichet Ong, a well-known New York City pastry chef who had started his own bakery and was recently featured in Bon Appetit magazine.

“The funny thing about that is I got that job on a fluke. I didn’t tell him that I had never worked in food before,” she says. Shepherd had been randomly selected to be profiled by Bon Appetit as a featured reader. “I walked into the bakery, and I showed him the magazine, and I said, ‘Look, we’re in the same issue of Bon Appetit.’ He didn’t look into the details or the fine print that I had never worked in food, and he said, ‘When can you start?’” Shepherd says. “That was how I got my first job in food, by tricking him into thinking I was a legit chef.”

While at Batch, Shepherd realized that her eating habits were not great and she began transitioning to a vegan diet.

“I decided to make all of my desserts vegan too. It was just a matter of converting everything and substituting ingredients,” says Shepherd. “I didn’t want to give up the recipes that I loved and worked so hard perfecting.

“That is exactly how the yogurt started,” Shepherd says, “I found substitutions for everything except yogurt.”

It was when Shepherd began working at a booth at Smorgasburg, an annual outdoor food flea market in Brooklyn, that the coconut yogurt experiments got serious. In the spring of 2013, Shepherd had taken a yogurt training course at Cornell University to learn more about cultured dairy which helped her tweak the recipe. That summer, she began soliciting feedback from chefs, foodies, and friends on flavor, texture, and consistency. In November 2013, Anita’s Coconut Yogurt launched.

“We had this tiny refrigerator in our kitchen, and if I took out all the food and all the shelves, I could fit five cases of yogurt,” she says, but with the addition of a sixth client, Shepherd moved operations to a commercial kitchen which she rented during overnight hours.

In 2014, Shepherd’s efforts turned a meager but encouraging profit, and she added one employee. By 2015, Anita’s Yogurt had its own facility in East Williamsburg, Brooklyn, and sales quadrupled. Shepherd added another seven employees, but by 2017, they hit a ceiling.

“And so that’s why I’m here upstate now, because to scale up and grow, I have to outsource the manufacturing,” she says. Shepherd still maintains the East Williamsburg location as a headquarters as well as a space to continue experimenting with recipes and new product development.

“At the time that I launched the product, all the other brands were using tapioca starch and carrageenan and additives to do it,” Shepherd says explaining what makes her product unique. “But with coconut, we don’t have that,” she says, “It’s a very low protein milk, so we have to rely on cultures that will do the work in other ways.”

As she considers if her biology training at St. Lawrence has influenced her career, Shepherd confesses, “A few years ago, I would’ve said, ‘Oh, no. No way.’ But now, I think it would be silly to say that, and it would be silly to assume that studying biology had nothing to do with it, because the whole process of developing the product was an experimental process. I basically had to isolate the variables and create a control group. And, all of these things I learned in studying biology that I took for granted were a part of that process in innovating the product and sourcing the ingredients,” she says.

Fast forward to summer 2018 in upstate New York and Shepherd explains, “Today we’re making a 500-gallon batch. I’ve never made that much yogurt before. I have never even made half that much yogurt. It’s a huge leap, and I don’t know if it’s going to work, but if it does, that’s a huge step.” Shepherd continues, “I mean, even if it doesn’t work, it’s still a huge step.”

It seems likely that even if she fails, Shepherd will find a way to make it work.