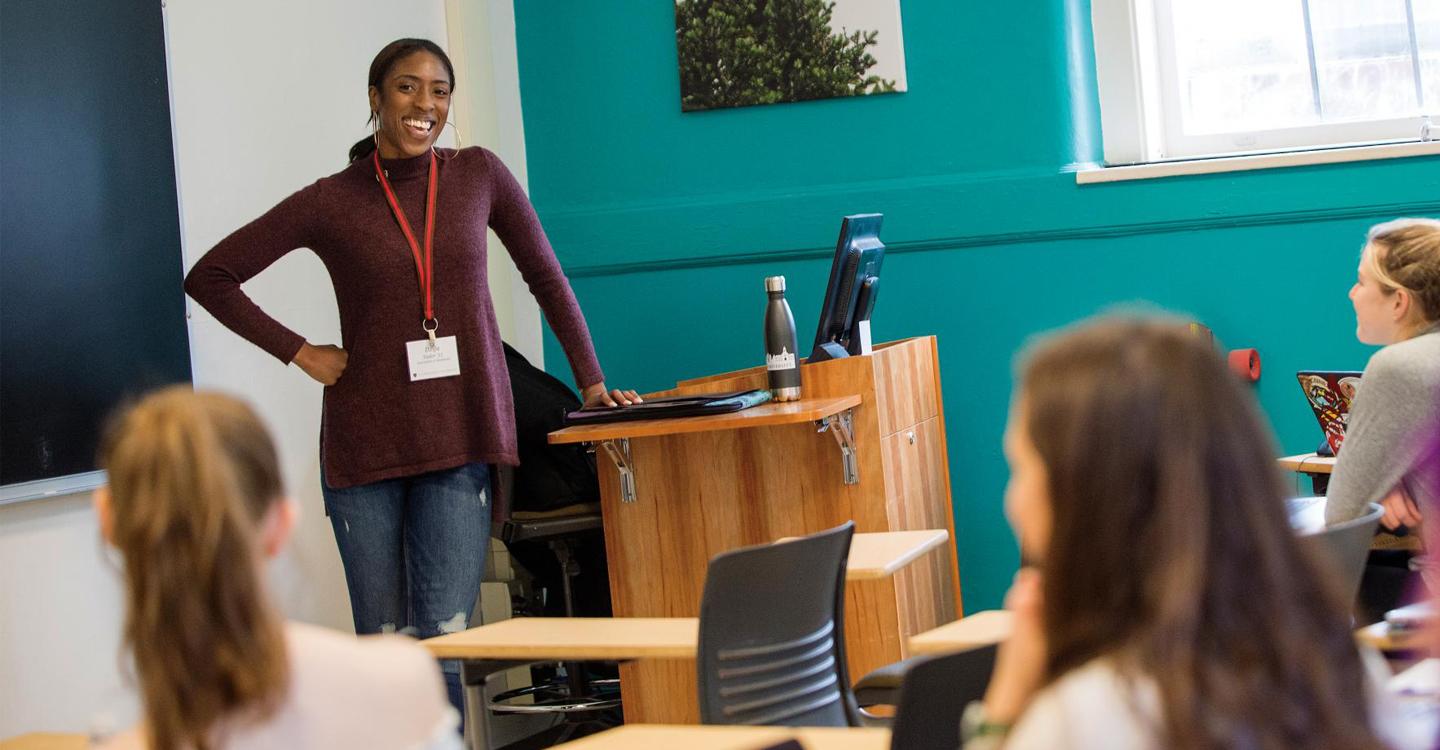 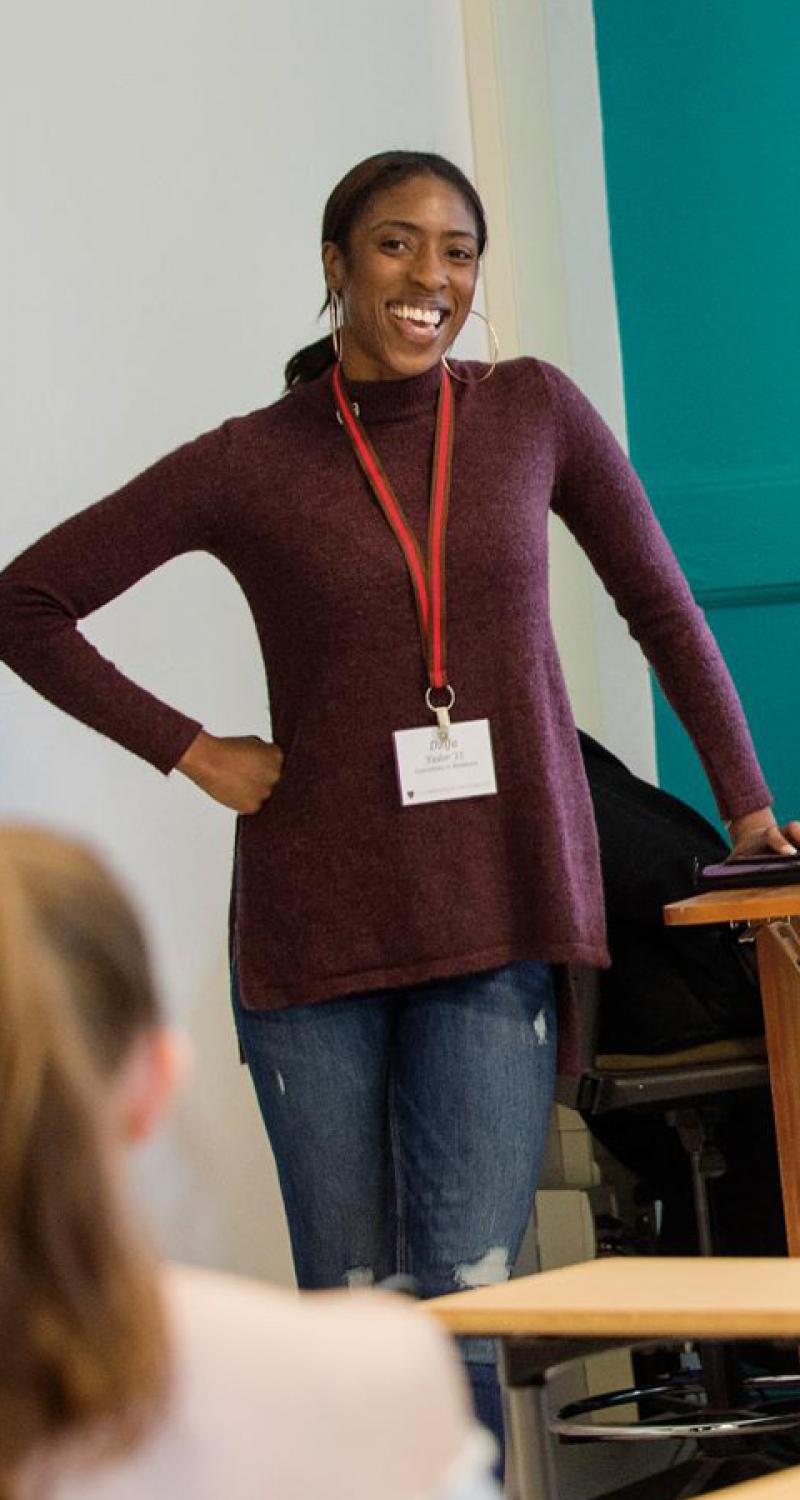 A Laurentian In Residence

Dzifa Yador ’11 is back on the St. Lawrence campus for the first time since her graduation.

Yador is referring to the Laurentians in Residence panel that she and four other young alumni were invited to join. They’ll sit in the student center’s large Hannon Room and answer questions. Audience members will want to hear how she made the leap from St. Lawrence to her job as a television producer at Velocity, Viacom’s in-house creative agency.

It’s a good story about a “born and raised Bronx girl” who got a great job and moved back to her NYC borough, on her terms, because she came to St. Lawrence.

“Originally, I came in thinking I was going to be a lawyer,” she says and laughs. “I don’t like to argue, I just like to see all sides. So, I ask a lot, a lot of questions.”

That was her path until she started looking into internships her junior year. Then, she asked herself what she really wanted to do. She says she didn’t get hit by a metaphorical thunderbolt. Instead, she took her time, did a lot of research on her own and started looking seriously at the entertainment industry.

With help from the St. Lawrence career services office, she landed an internship with MTV, but didn’t know how she could spend an unpaid summer in New York City.

“Career services really made it possible,” she says. “They helped me with grants and all the resources that I needed to get back to the City that summer.”

For Yador, coming back to campus as a Laurentian in Residence is a way of saying thanks, of giving back to the academic community that helped shape her and extending the opportunities offered by the University’s long-running, alumni-student network.

“When I was a student,” she says, “I went to every Laurentians in Residence event I could attend. I thought it was so rewarding that alumni would come back in the service of students. They would give up some of their time to explain what they’ve done, what they’re doing now and how they went from St. Lawrence to a career.”

Yador says she realized how important these events were to her own professional development—and how she might play a similar role for current students.

“I thought it was important for students to see someone in entertainment,” she says, “someone who navigates this digital, original-content, social-media age that we’re in. I want to show them they can be this producer, content creator, or editor. They can be all of these things they’re aspiring to be, but don’t realize how tangible it can be. I want to inspire them to do way more than I’ve done.”

With that, she’s off to speak to her first class of the day, The Place of Contemporary Female Directors. She is peppered with questions:

“How did you get started? How can I break into the field? Is it female-dominated? How do you come up with projects? How are they budgeted?”

“They asked great questions,” she says after the class. “It’s fascinating that they’re so keyed in to so many issues in entertainment.”

Then, it’s time for lunch with President Bill Fox, his wife Lynn, Trustee Barry Phelps ’69, staff members and the other Laurentian-in-Residence panelists. Conversation ranges from their mentors to how it felt, as alumni, to be back in the classroom. Afterward, the young alumni return to classrooms and speak with more students. Yador steps into Culture and Identity in the Digital Age.

The students have seen a documentary that Yador produced with her Velocity colleagues and a discussion swirls around her work, television, web-based content, influencers and what audiences want.

Amid all this, one question takes her—once again—full circle: “How did St. Lawrence prepare you for what you’re doing now?”

Yador answers instantly, but patiently, “My performance-and-communication-arts major gave me real skills—how to talk, how to make productions work. And when I saw that I could do those things, it was a real confidence booster. My professors gave me a high level of autonomy and support. They were there when I needed them and they let me craft my own career path.”

After the class ends, Yador talks with University staff and students about social media. Then, some well-earned, (though brief ) free time and dinner with the Student Alumni Association.

“The St. Lawrence campus is a conduit,” she says. “The essence of this place is a connection across generations. I’ve seen a 20- and an 80-year-old get into a campus golf cart as strangers and get out chatting like they’ve known each other their whole lives.”

Their experiences here break the ice, she adds. Those experiences also help her recruit alumni and parents to come back to campus as Laurentians in Residence.

“Every person I ask jumps at the chance to take part,” McKernan-Walley says. “I’ve never had anyone tell me no. Some people have a scheduling conflict, but even those folks ask if they can take part in the next panel.”

When she talks about the popularity of the Laurentian in Residence program, she echoes Yador.

“Alumni who attended the panels and classes as students know how valuable these events are,” she says. “So many students got that first or second or third job because of this program. Laurentians want to be connectors because this is how they give back to the community that gave them so much.”

Now, it’s the big event: the panel discussion. The Hannon Room is packed. Yador and the other panelists sit behind a long table. After meeting each other at breakfast, they seem like old friends here. The moderator asks them to introduce themselves, then needlessly asks the audience for questions.

Needless because, other than that long table, a few years are all that separate these young alumni and the students in the audience. They see themselves in each other.

The questions reflect this:

“How did you figure out what you wanted to do? How did you know what you were good at? Where should I start? Was it hard?”

Each panelist speaks from the heart:

“Be yourself. Be confident. Know that the work you’re doing now will pay off—more than you can imagine. Go to those networking events. Yeah, everybody’s nervous, just talk with people.”

Yador announces that she’s assigning homework to everyone in the audience.

The event has to end, but a lot of students linger. The buzz of conversation rises and falls, but the excitement in the room doesn’t fade.

The students have seen the future. The alumni reached back to lend a helping hand. Now that they’re mixing with each other and talking together, all of them are having a full-circle moment.