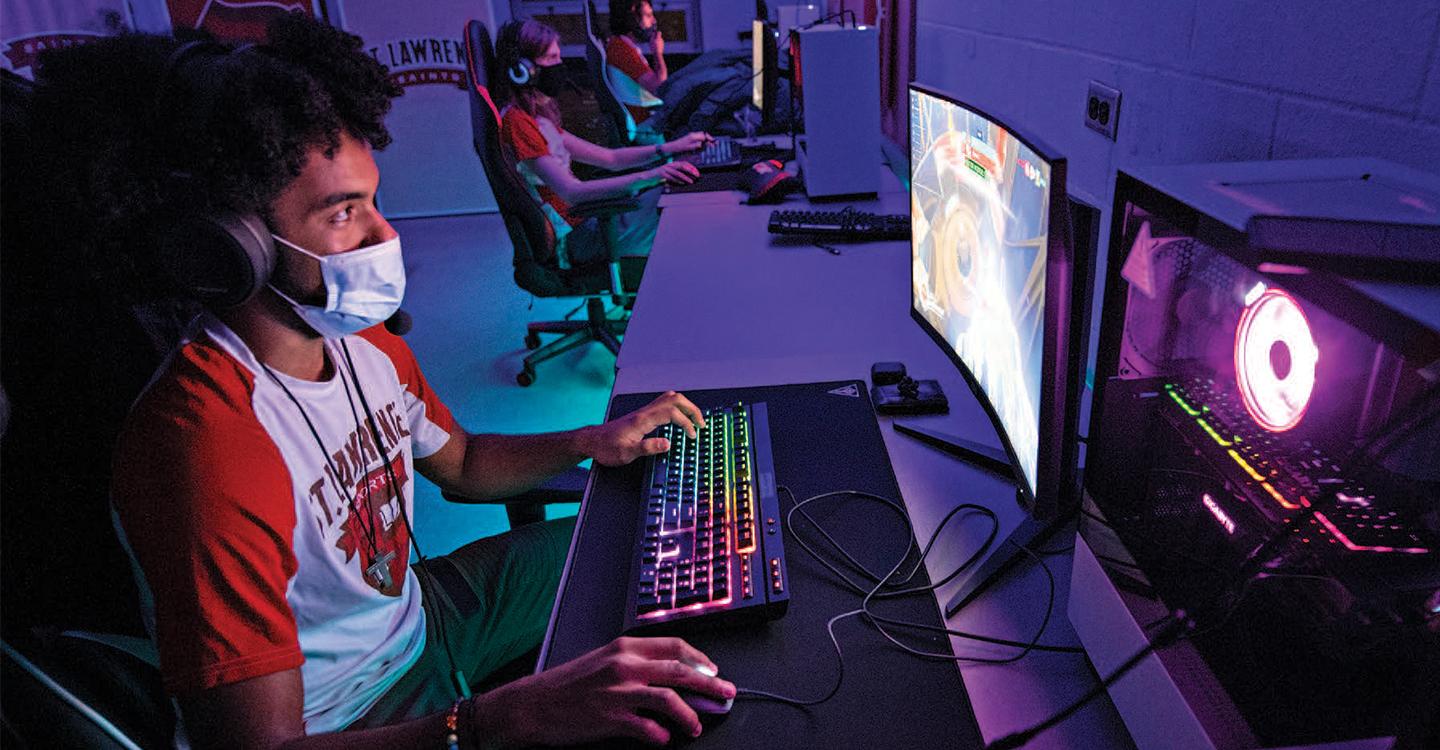 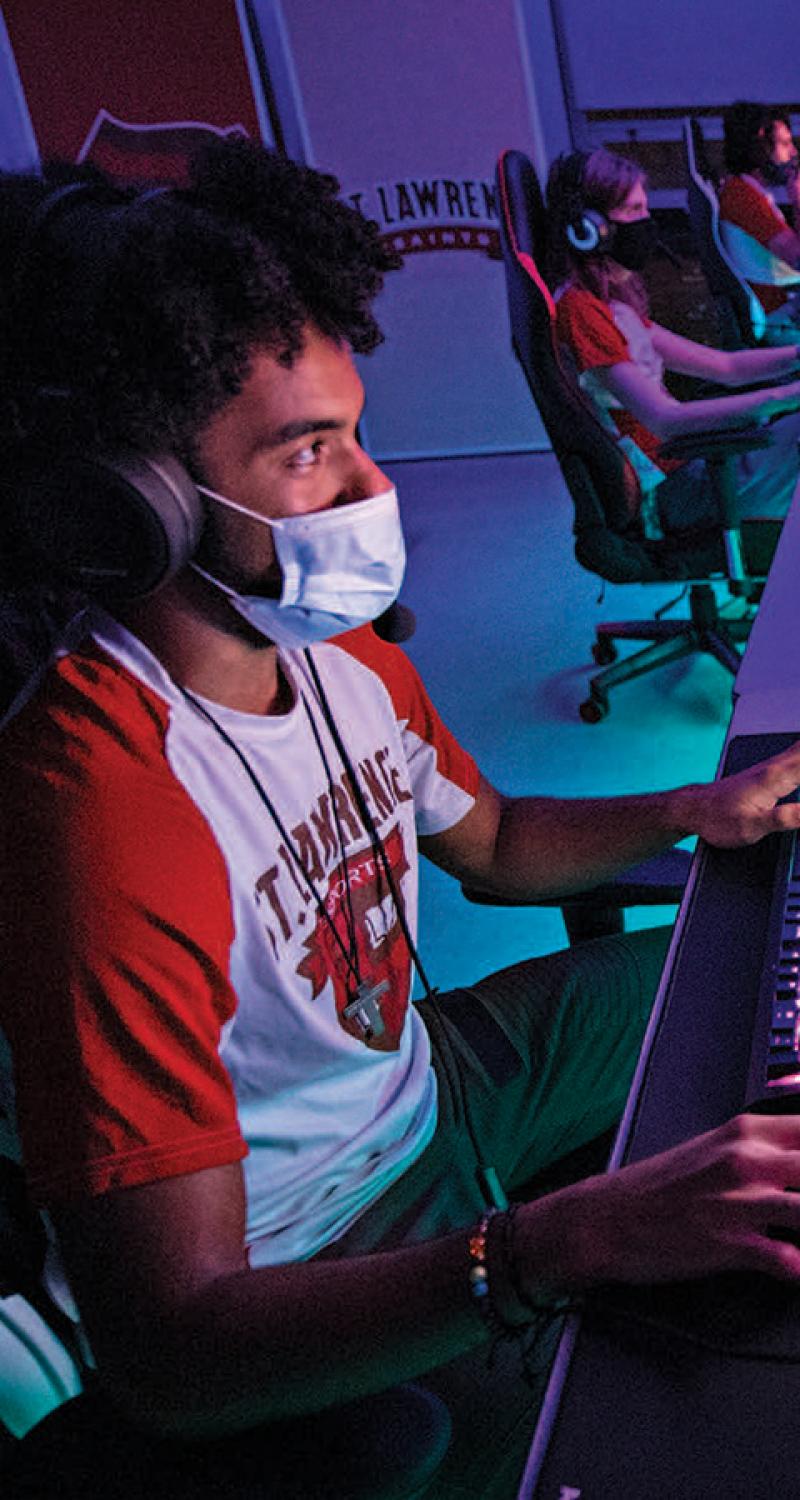 The Importance— and Impact—of Esports

Cheering on the competition, teamwork, and achievements of St. Lawrence esports student-athletes.

Joining a varsity sports team gives students a lot—social interaction, an understanding of strategy, and a way to structure and manage time. Esports do all this, too.

The organized, multi-player, online competitions have grown in popularity for professional esports athletes and on college campuses. Last year, the number of collegiate esports programs tripled to more than 300 nationally.

“The student-athletes in our esports program gain the same leadership and communications skills as those in our more traditional programs,” he says. “It takes a great deal of practice, teamwork, scouting and advance planning to be successful in esports, just as it does on a soccer field, the basketball court, or swimming pool. Our student-athletes, whether they compete in physical or digital arenas, they learn from their experiences, celebrate their successes, and strive for continual improvement.”

Durocher says the University itself also benefits from the esports program.

“Online competitions have enormous audiences,” he adds. “Esports are incredibly popular with high school students. Having a varsity esports program demonstrates the University’s commitment to this type of athletics and that’s important to our prospective students. This program is already attracting student- athletes who want to be part of it.”

Sarah Barber is the associate dean of the First-Year Program at St. Lawrence and associate professor of English. She sees how the esports program is helping current students.

“It’s bringing together students who might otherwise not get to know each other,” she says. “As esports student- athletes, they’re bonding as a team— online and in real life—over a meal at Dana or hanging out after practice. It’s collaborative and it’s helping students grow interpersonal skills."

Barber adds that esports have also opened a new channel of communication between students and faculty.

“Because our Athletics department works so closely with Academic Affairs and Student Life to support students,” she says, “it’s awesome to have coaches to contact when an esports athlete needs extra advising related to classes. The result is what we all want: We’re better able to help students succeed.”

Kyle Jicha is one of the St. Lawrence esports coaches. He’s also a systems engineer in the University’s library and information technology department. Jicha and a few other staff members on campus used surveys to identify the most popular multi-player esports games on campus, then organized a tournament in hopes of finding interested players.

“About 60 students showed up,” he says, “from every class year on campus, some athletes from other sports, some techies, some from the arts, sciences, you name it.” 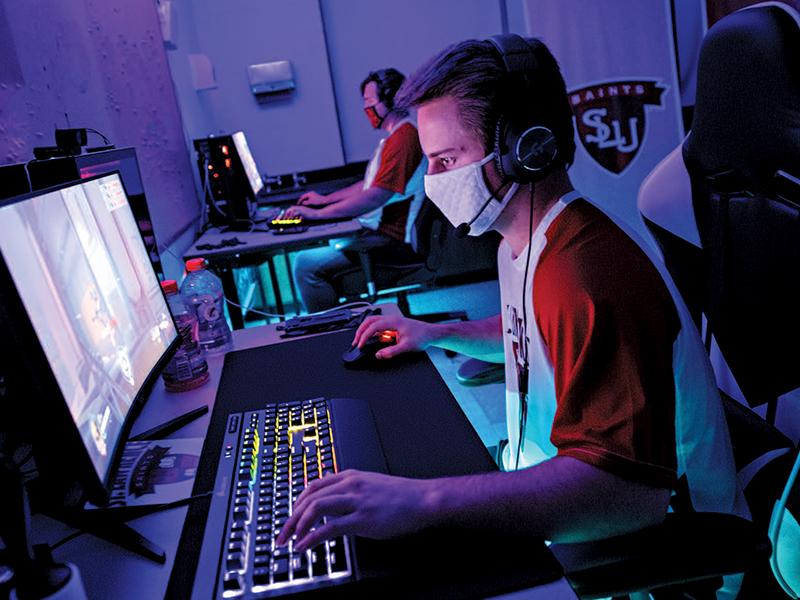 Organizers created teams and chose the games that were most popular among students, Overwatch and League of Legends. Even before last year’s club- level practices and limited intercollegiate play, this revealed an important aspect of esports: These programs are virtually unmatched in their ability to attract and include a rich diversity of participants. For example, there are no gender-based divisions between competitors or teams.

“Men and women play against and with each other,” Jicha says. “Strategic thinking and skill are the abilities that matter here. And the technology has already evolved to level the playing field to include esports athletes with disabilities, too. We see this on our teams. You don’t have to be a certain ‘type’ to be a good player.”

Esports have also connected people around the world.

“You can get online and compete with Indonesians, Brazilians, Kenyans, anybody, anywhere and all at the same time. Esports are really popular with international students, too. This program has already prompted students around the world to consider St. Lawrence.”

It was also possible to practice and play esports while adhering to social distancing and other pandemic precautions. As esports student-athletes were preparing to compete in the fall of 2020, senior staff at St. Lawrence saw the commitment of students and coaches and made the program an official University sport.

“We posted 11 wins and seven losses,” Jicha says. “So, we made it to the East Coast Athletic Conference’s ‘Sweet 16’ out of the 85 institutions that competed.”

He’s quick to note, though, that putting big numbers on the scoreboard is nice, but not his top priority.

“For me, it’s more about creating a niche for St. Lawrence students,” Jicha says. He’s had success with this, too. “In this community, we’ve set the stage for students to learn from each other and from us, while having a structured environment and purpose. Our student-athletes can progress here and that’s something this team and all of St. Lawrence can feel good about.”

Eric Shinnick also coaches esports, in addition to his role as St. Lawrence executive director of finance. He says it’s rewarding to see students develop into good teammates and leaders.

“For students who may have thought they had a limited path—or no path—to express their competitiveness, our esports program opens doors to what they’ve been hoping for: the chance to be part of a team and work together to achieve a common goal.”

It’s a skill, he adds, that will serve them well in their personal and professional lives. “This program creates opportunities,” he says. “It expands what’s possible for our student-athletes.”

Jicha says the program presents a similar opportunity to the University itself.

“The ways we use and showcase this platform have the potential to tell the world who we are,” he says. “Our prospective students want to learn. They also want to be part of something that lights up a bunch of different parts of their brains. And that includes competitive sports and fun and a social group that includes them because it values them. Our esports program gives us another way to tell prospective students that all of this is here, at St. Lawrence, just waiting for them to discover it.”

Supporting St. Lawrence Esports
Our esports program and student-athletes need the infrastructure of any athletic program, including the physical space to practice and compete. Equipment is another need, specifically the high-speed computers that connect competitors and render the advanced graphics within this digital world.

To learn more about supporting this new team, contact the Director for Athletic Development at St. Lawrence Andy Whittier ’91 at (315) 229-5511 or email awhittier@stlawu.edu.