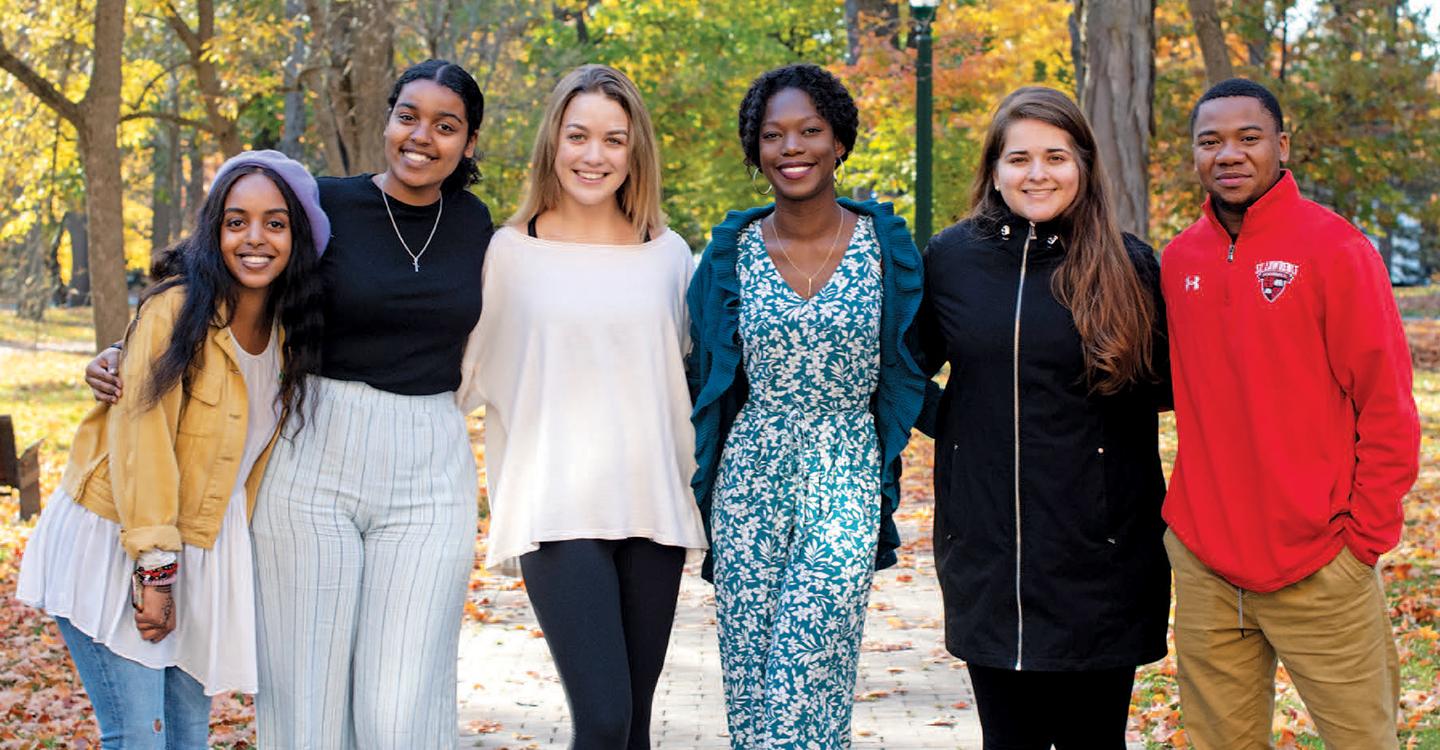 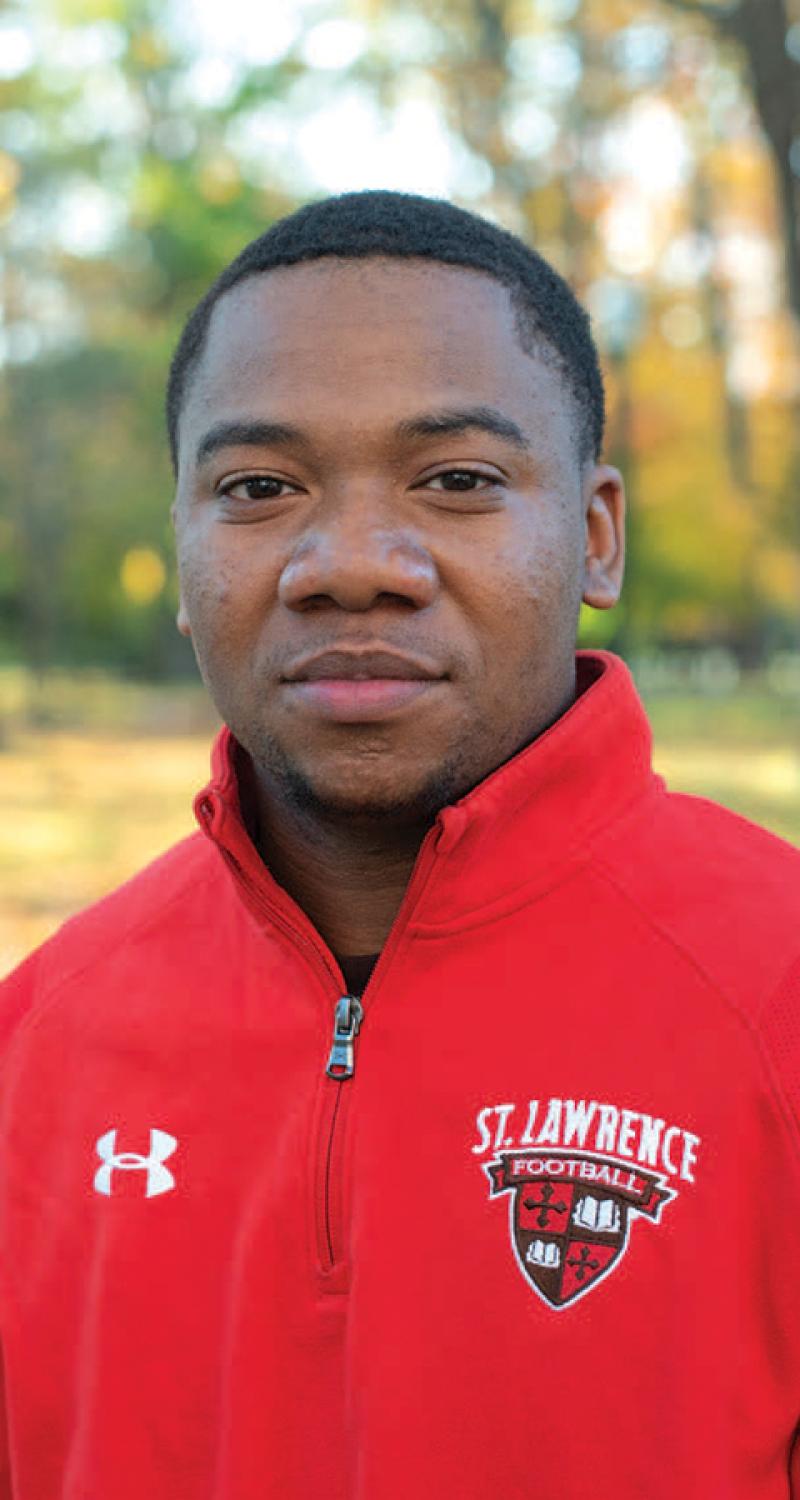 St. Lawrence does not mold students, partly because Laurentians cannot be molded. Instead, we help each other find meaning in ourselves, our curiosity, and our aspirations. This story is the first in a series looking at how we transform each other.

If you ever get the chance, talk with Trey Wheeler ’20 about his life and the impact St. Lawrence made on him.

“My mom would tell me, ‘If anything goes wrong, take five minutes, stretch, scream, whatever you have to do. After that, pick it up and keep it going.’”

That advice stuck with him.

During his freshman year of high school, Trey’s mom died, just a few months after she was diagnosed with cancer. Not long after that, he found himself homeless. Through it all, his mother’s advice helped keep him going.

He earned a 4.3 grade-point average in high school in Kissimmee, Florida, even while playing football, taking extra, advanced classes, and making deliveries for a nearby florist.

“That was money for gas and car insurance,” he says. “A few nights, my car was home, too.”

It was partly football, but mostly his academics, that provided a way out.

He was being recruited by Ivy League football teams when a St. Lawrence coach slipped him a card and said, “Think about us.”

In a follow-up call a short time later, Wheeler learned he might qualify for a full academic scholarship at St. Lawrence.

As part of his application to St. Lawrence, Wheeler sought the Kirk Douglas ’39 Scholarship. It covers tuition, room and board, and other school-related expenses. Established in 1981 by Douglas and his wife Anne, and augmented with additional funding in 2013 to support experiential learning, this scholarship has become one of the University’s most prestigious academic awards. Student recipients represent diversity, have financial need, and demonstrate scholarly excellence and leadership.

Douglas, a dedicated Laurentian and one of the most famous screen actors of Hollywood’s golden age, died February 5, 2020. The scholarship bearing his name will continue to support exceptional students, like Trey — and will serve as a memorial to Douglas and all he has given St. Lawrence.

More than Just “A Shot at Survival”

Just as he did in high school and on the football team, Trey worked hard to earn the scholarship. He wrote essays and procured the documentation and letters of recommendation the University required.

When he learned that he had been awarded the Kirk Douglas Scholarship, he made up his mind immediately.

“I had been to campus,” he says. “I liked the small-town feel, but it was the people and the connection I felt from the beginning. That and the scholarship. My situation, I couldn’t take on student loans or debt.”

His experiences also led him to major in computer science.

“I wanted to go into a field that gave me a shot at survival.”

He got that and more, including a full-time, executive position in the corporate offices of Macy’s department store. He starts after graduating this spring.

“I got a summer internship in Macy’s executive development program and I did well,” he says. “They told me that they could see I understood numbers, the reasoning behind them. And I thought, ‘Well, that’s St. Lawrence.’”

From his First-Year Program to his final courses this semester, Trey credits his professors for giving him the intellectual tools to keep learning — to keep going — by adapting to new situations.

“This place is special,” he says. “There’s a sense of belonging here. It connects us, as Laurentians. So many alumni, professors, and staff have taken time to sit down and talk with me — to hear about me, not what I can do for them. That’s one big thing that’s different about St. Lawrence. People here got your back. No matter who you are or where you come from, if you’re a Laurentian, you never have to worry about being alone.”

Each of Us, Together

On campus, we constantly see the impacts of our combined Laurentian giving. These donor-supported funds and programs are transformational and they inspired us to launch The Campaign for Every Laurentian, the largest fundraising effort in the University’s history.

To date, this Campaign has been remarkably successful. We still need to raise more, however, to reach our goals and help our students shape their lives for the better.

Our Time is Now