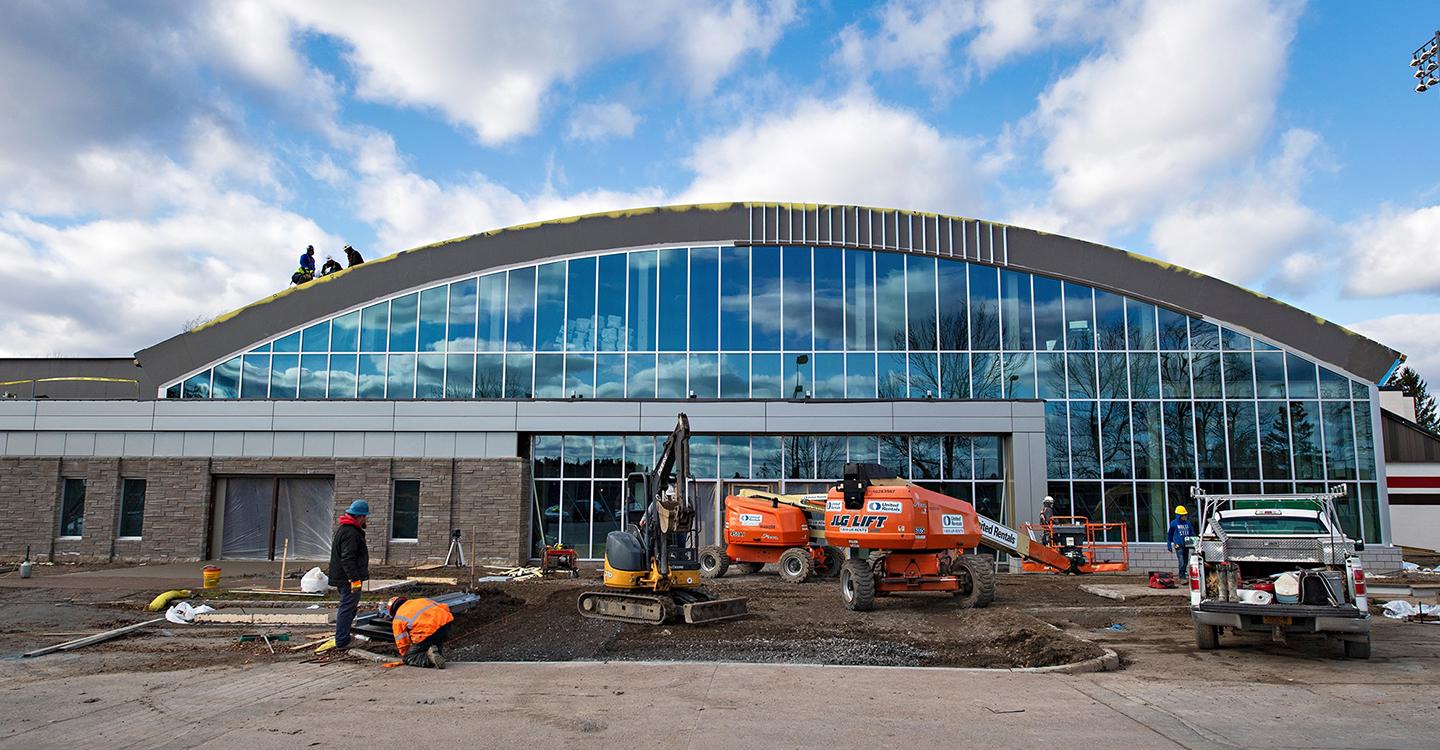 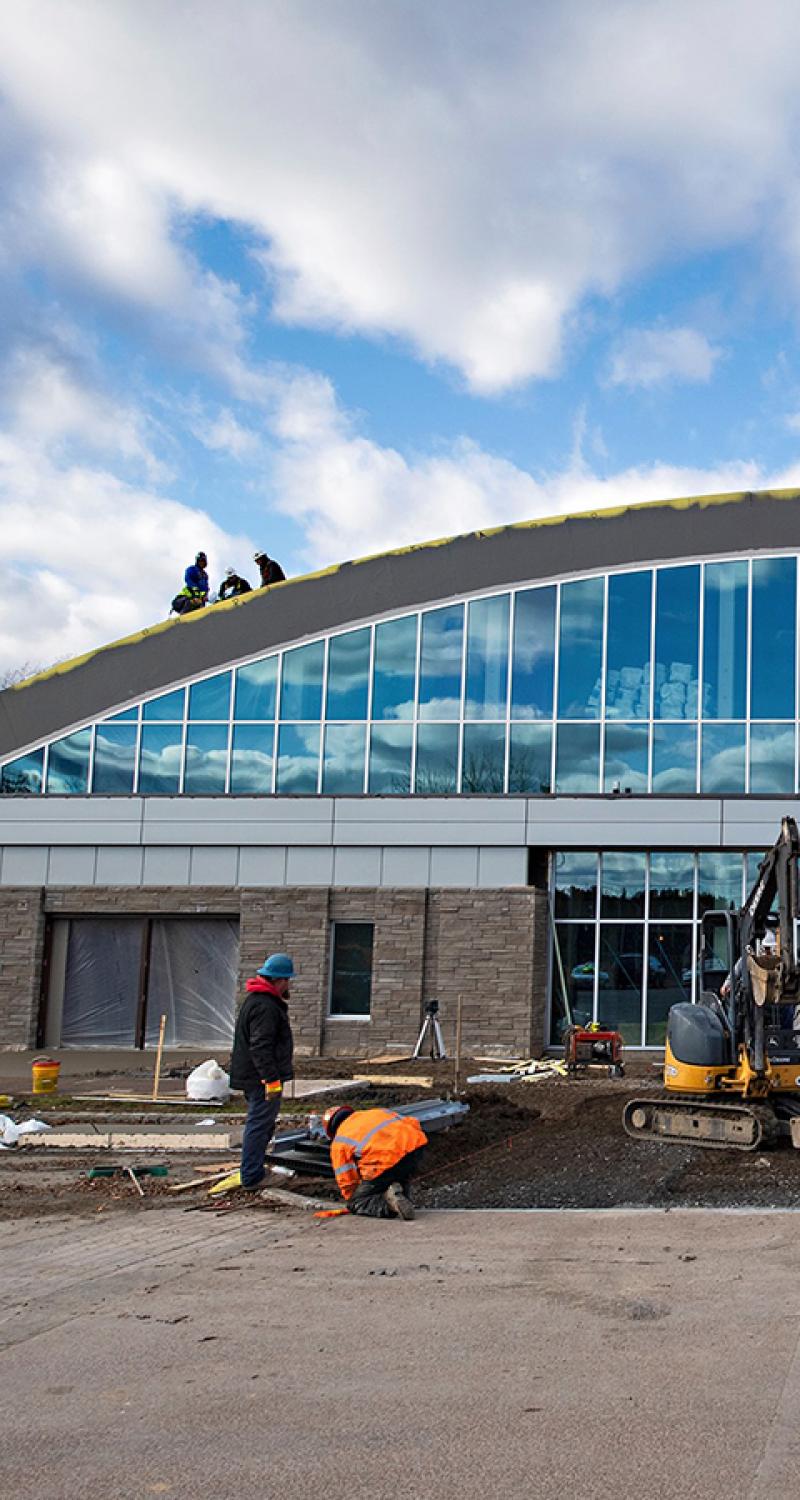 Memories and hope combine to support the revitalization of Appleton Arena.

“I will never forget the sub-zero walk across the frozen football field, carrying my hockey gear through the snow to Appleton.”

Rick Ankerud ’78 is talking about his first year at St. Lawrence.

“I was greeted by the rink attendant, who was talking – loudly – about the weather.  It was 20-below outside.  That’s when I heard the arena needs to be headed.  Why?  So the surface of the ice doesn’t crack.”

That’s just one moment from hockey memories that date back to his fifth birthday.

“Even as a little kid, I couldn’t wait for the next 4:00 a.m. drive to the Canadian rink, crossing the Peace Bridge [from Buffalo, N.Y. to Fort Erie, ON], the cold ice, the smell of tape on the sticks, the post-practice hot chocolate, and the excitement of being able to skate and skate fast.”

The “wood bowl” of Appleton – the rich, brown wood grain seats, the steps, and the arched rafters – is where Ankerud found a connection point between his past and future.

“Appleton played a part in my decision to attend St. Lawrence,” Ankerud says.  “The arena’s atmosphere brought back fond memories of my youth, playing hockey in Toronto.  It reminded me of the enjoyment I felt as a child.”

Now, he has lasting memories of the rivalry with Clarkson, the scarlet and brown that filled Appleton, and, during the games, the way sound from the stands bounced off the ice.

All this, however, is only part of the reason that Ankerud and his wife, Lori, recently made a major gift to support Appleton’s renovations.  There’s another story here and it revolves around Lori.

“We met at a hockey rink during a summer-league game,” Ankerud says.  “So, hockey has played an important role in our lives.  Still does.  Both our children have benefited from the sport.  Our daughter played hockey in college and our son, after being a high school all-star player, has pursued a career in hockey media.”

Throughout all this, the Ankeruds thought a lot about Lori’s hear.

“My wife is a congenital heart-defect patient,” Ankerud says.  “She was born at a time when long-term survival of childhood surgery was not favorable.  Still, even with her lifelong condition, she has thrived.”

She had a few successful, heart-reconstruction surgeries a couple years ago.  After that, Rick and Lori talked about their future.

To that end, the Ankeruds founded a non-profit, heartfelt Dreams Foundation.  As they provided emotional, educational, and financial support to families with children born with congenital heart defects, they found philanthropy deeply meaningful.

They wanted to do more.  Fortuitously, this was the moment they heard about The Campaign for Every Laurentian.  As the biggest fundraising effort in the University’s history, this Campaign has an impact on every St. Lawrence student, alumna and alumnus, parent, and faculty or staff member.

“As the CEO and President of a non-profit charitable corporation, I have become keenly aware of the importance of fund raising and planned giving in support of important, meaningful objectives,” he says. “My wife and I believe there is a joy in giving while serving the causes we love.”

For the Ankeruds, the Campaign is exactly that: the chance to focus their support on something they love about St. Lawrence.

“The Campaign opens the door for all of us,” he says.  “When we give, we make that something – whatever it may be – better and more likely it will be there for St. Lawrence students in the future.”

That’s true of all the Campaign’s “Big Ideas:” Endowing Our Future, Learning for the 21st Century, the Power of Connections, Campus Stewardship, and more.

“Lori and I hope our gift to Appleton will inspire St. Lawrence student-athletes,” Ankerud says.  “We want every Skating Saint to love the sport and the traditions.  I’m a true believer in hockey heritage and a fan of the sport’s history.  This gift celebrates all that.  Most importantly, though, it will influence students – now and in the future – in the same way that hockey has strongly influenced our lives.”

For more details on the Appleton Arena renovations, The Campaign for Every Laurentian, and how to support what you love at St. Lawrence, contact Andy Whittier at (315) 229-5511 or awhittier@stlawu.edu.

Naming a Space in the Renovated Appleton Arena

In addition to supporting the renovations to Appleton Arena, the Ankeruds’ gift also gave them the opportunity to name a space within the Arena itself.  They chose a large room on the concourse level, designed for both Skating Saints alumni and recruitment of future players.

This is how the Rick ’78 and Lori Ankerud Hockey Alumni Lounge came to be.

“We were especially pleased with this naming opportunities,” Rick says.  “It represents much of what we think about when considering hockey and St. Lawrence.  It’s also a reminder of all the rich heritage hockey has in college sports and our society.”

The Ankeruds hope their gift will be a message to other Laurentians.

“We want everyone to know the importance of ongoing support for the academic and athletic missions at St. Lawrence,” Rick says.  “Our gift is one of the many needed to complete the Appleton Arena project.  We believe that coming together on this will result in a facility that will make St. Lawrence student-athletes proud and will help re-energize the hockey program.”

You can see floorplans of the renovated Appleton and learn more about the Arena’s naming opportunities by visiting the Appleton Arena Project site.  If you’d like more information, please call Andy Whittier, the University’s principal gift officer and director for athletic development, at (315) 229-5511 or email awhittier@stlawu.edu.