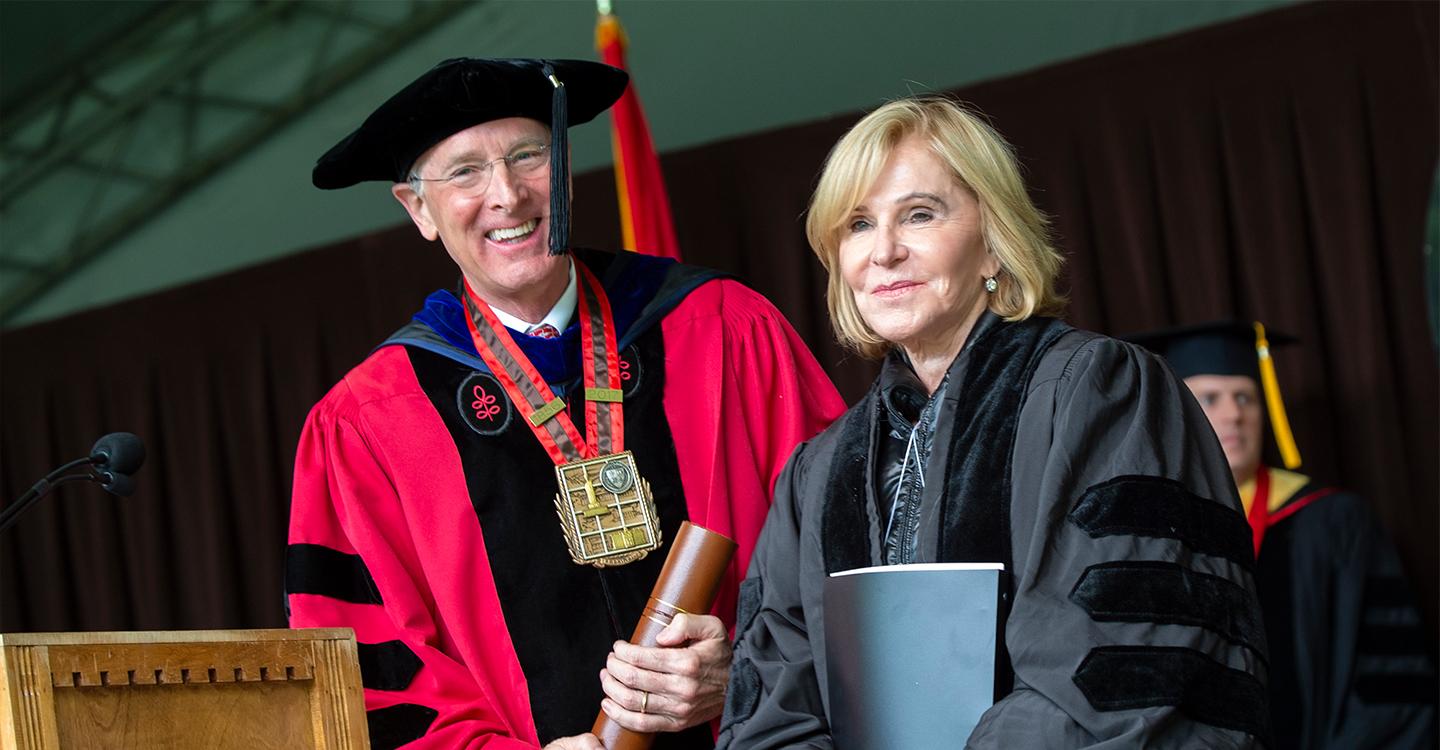 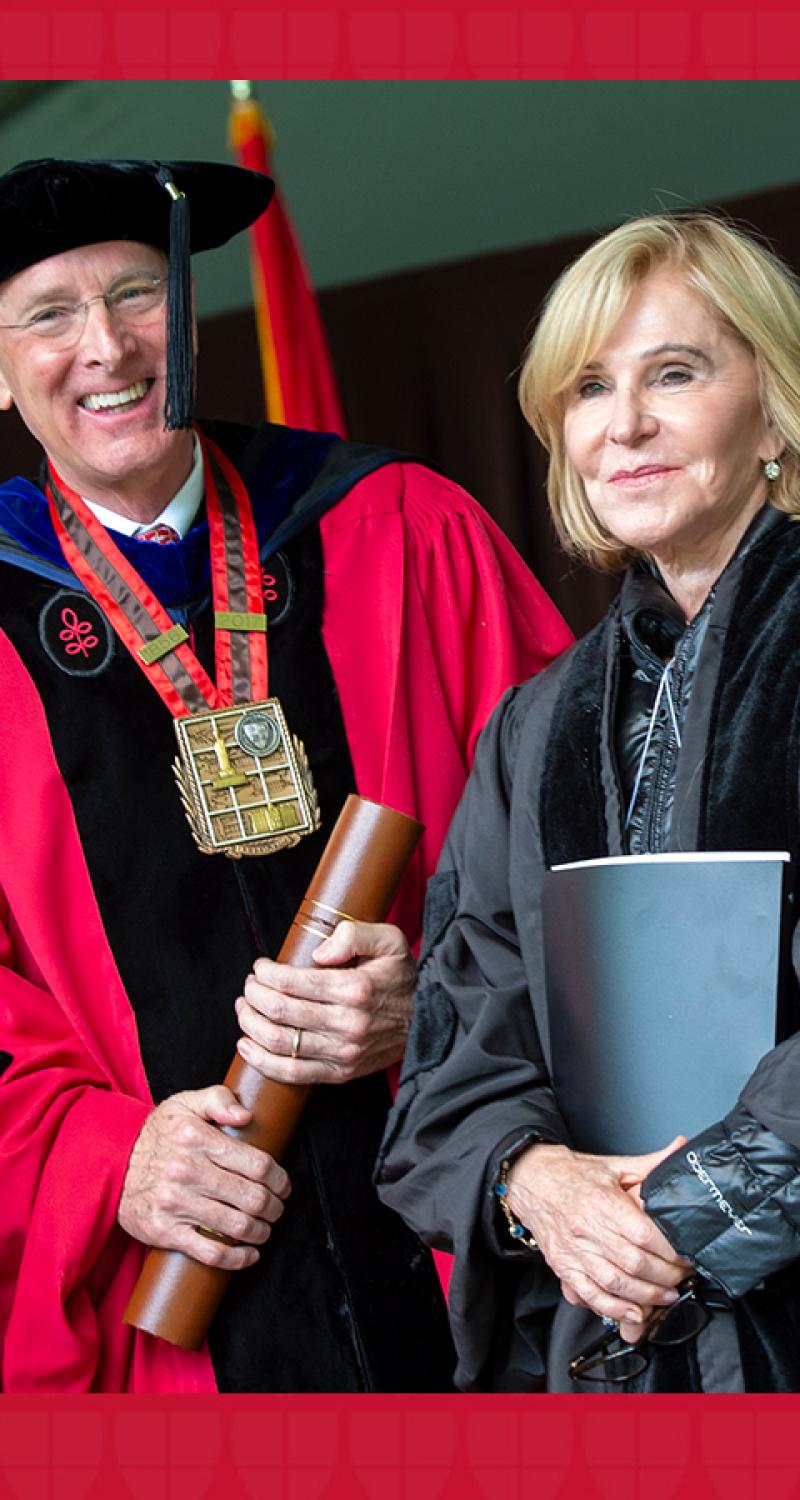 St. Lawrence University will benefit from a $1 million grant made by the Eisner Foundation to the endowed fund that supports the Fox Center for Academic Opportunity. The recently renamed center honors President William L. Fox ’75 and his commitment to every student’s ambition and life preparedness.

The Eisner Foundation was founded in 1996 by Foundation President Jane (Breckenridge) Eisner ’64 and her husband Michael D. Eisner, then-chairman and CEO of The Walt Disney Company, in order to focus their family’s philanthropic activities. The Eisner Foundation identifies and sponsors innovative programs that unite multiple generations for the enrichment of local communities.

“To know Jane Eisner as a wonderful friend through our shared connections to St. Lawrence is a cherished gift to me personally,” said President Fox. “She is an extraordinary leader and inspiration, an exemplar of Laurentian habits of serving important causes with her depth of intelligence and unassuming joy. With her sons and husband, I will always look up to Jane.”

“Michael and I are delighted to celebrate the tenure of President William Fox in such a special way," said Jane Eisner. “His inspired leadership and profound humanity have always been student-focused and the Fox Center will continue his vision to ensure that we see in each individual student during their four years on campus an example of human adaptability and the capacity for goodness walking our college paths.”

The Fox Center for Academic Opportunity, located in the recently renovated Madill Hall, is an inviting, technologically advanced space located between the Sullivan Student Center and the Johnson Hall of Science. Various academic advising and support offices are located alongside one another, as well as testing and study rooms and several collaborative spaces, which has created a support ‘hub’ in a central location that makes it easier for students to stop in and take advantage of its countless resources. The renovations were made possible thanks to gifts as part of The Campaign for Every Laurentian.

Eisner received an honorary Doctor of Humane Letters from St. Lawrence in 2017, has served on the board of trustees for the American Fund for Aids Research (amFAR) as well as on the boards of directors of the Harvard-Westlake School and the Los Angeles Philharmonic Association. She is a member of the Aspen Music Festival National Council and serves on the board of visitors of the David Geffen School of Medicine at the University of California Los Angeles. She is the past chair of the board of the California Community Foundation and is a past member of the Smithsonian National Board, the Los Angeles YMCA and KCET, the largest independent public television station in the U.S.

Eisner philanthropy has impacted the lives of St. Lawrence students for many years through her generous support of the St. Lawrence Fund and the Karen M. Urciuoli Scholarship, which was established in memory of her friend and classmate, Karen Urciuoli ’64, and supports female students with financial need who reside in central and northern New York.

The Fox Center for Student Opportunity fund is part of The Campaign for Every Laurentian, the largest comprehensive fundraising initiative in the more than 160-year history of St. Lawrence University. With a fundraising goal of $225 million, the Campaign supports four priorities: Endowing Our Future, Learning for the 21st Century, the Power of Connections, and Campus Stewardship, as well as continued support for the St. Lawrence Fund. The Campaign, now in its final year, totals $216 million in gifts and commitments.