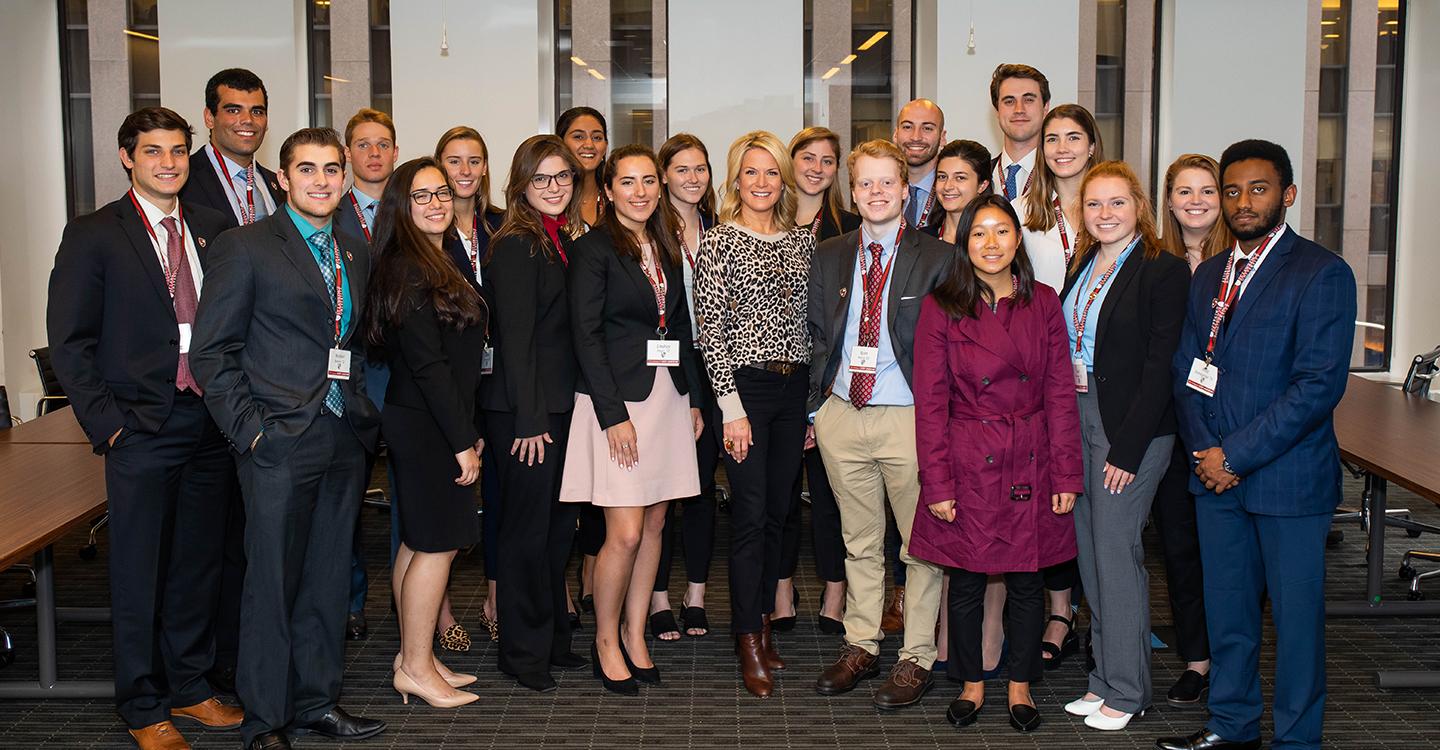 A major gift to the University will help Laurentians put our knowledge and culture to work for a specific purpose: bringing each of us together.

“I think everyone is well aware that there’s a lot of division in political thought in America today.”

Martha MacCallum ’86, P’23 has a unique perspective on politics. As the anchor of the nightly news show The Story on Fox News, MacCallum has covered politics and interviewed national leaders for the network since 2004.

As a Laurentian, recognized by the University for her professional accomplishments, she has an idea that can help students be more knowledgeable about politics and discuss political issues on their merits.

“My wish is that both sides continue to hear each other out,” she says, “have civil conversation, and really make an effort to try to understand issues from different viewpoints. College is where you want to expand your way of looking at the world. You want to be exposed to other kinds of thought and you want to be open and tolerant of differences. Just as we encourage diversity in so many ways, I think we also want to recognize political diversity as well.”

As part of The Campaign for Every Laurentian, MacCallum recently made a major gift supporting the St. Lawrence Fund and the networking and career development program SLU Connect. Another part of her gift will create a new, on­-campus initiative called Fostering Civil Discourse in Political Conversations.

This unique effort is now taking shape. St. Lawrence Vice President and Dean of Academic Affairs Karl Schonberg is one of the faculty members working on specifics. He says the initiative will likely include lectures, research into controversial issues, informal chat sessions, and even large, student gatherings with keynote speakers on campus.

“We’re connecting with student groups now,” Schonberg says. “It’s important to ensure that this initiative will have an impact across our community. As always, we’re focusing on students and learning outcomes. We want them engaged, from the planning stages onward.”

MacCallum and Schonberg talk about this program as an example of the Power of Connections, one of The Campaign for Every Laurentian’s “Big Ideas.” They consider the program a natural outgrowth of St. Lawrence culture.

“Since 1856, the University’s mission has been educating citizens for democratic engagement,” Schonberg says. “We help students develop their own views so they can be engaged in the crucial questions within American society. By listening to others, we refine our own views and help others learn. This is how we find common goals and shared values. It’s one of the best ways to figure out solutions that might elude those who are solely focused on a limited perspective.”

MacCallum sees St. Lawrence as an ideal place for this kind of dialogue — and the late teens and early 20s as the right time of life to deepen political knowledge.

“Simply living our lives,” she says, “we all have experiences that test the way we approach things, even those things we thought we fully understood. Life itself is a teacher. When you’re in an educational environment like St. Lawrence, you can absorb even more information. Sometimes, you might change your opinions about things. You might not. But I believe that simply having open dialogue is really the basis of education, and you have to have it respectfully.”

Schonberg also speaks of that respect as vital to both St. Lawrence and civil discourse.

“All of this is distinctly Laurentian,” he adds. “The strength of our community and the way we value it, these things distinguish us from other liberal arts colleges. As Laurentians, we have an attachment to each other and to this place. Our network is remarkably strong for that reason.

St. Lawrence students feel they have a lot to share with other students and alumni, even those who graduated many years before or after them.”

For Schonberg, it is this sense of community that makes St. Lawrence the right place to create and host this initiative. He stresses, however, that MacCallum’s gift provides the resources to launch this initiative and put both the University’s culture and learning into action.

“This is a place where we feel like we can disagree,” he says. “We can feel strongly that opposing views are wrong. We might find others’ positions offensive. Still, we respect each other as members of the Laurentian community.”

Part of being Laurentian, he adds, is acknowledging that there’s a conversation to be had.

“So much of our society seems consumed by a belief that anyone with opposing views must be a bad person,” he says. “And some will use that as an excuse to treat others as if they have no value as a person. At  St. Lawrence, we don’t say those things to each other.”

One reason for this, according to Schonberg, is the conviction among Laurentians that simply coexisting isn’t enough.

“Every Laurentian,” he says, “wants this to be a thriving community, because that’s how you learn. If you’re sitting in a classroom or dorm room and you never hear somebody say anything you disagree with, you’re not going to refine your own views very much. You’re not going to be able to learn as much as you would from sitting with somebody who respects you and is willing to listen to you, but is also going to say, I just don’t see it that way, and I think you’re wrong. Then, maybe you convince them or your views change. It’s in that process you learn how to have a dialogue that is challenging to you and gets you out of your intellectual comfort zone without breaking relationships.”

MacCallum sees this intellectual give and take as an important part of the Civil Discourse initiative.

“I think it would be interesting to have students take different perspectives,” she says, “perhaps even different than their own thinking supports, and take another side’s argument.”

By engaging in this kind of debate environment, she says students will test themselves and each other.

“If they come out the other side still feeling strongly about their beliefs,” she adds, “that’s great. They’ll feel more solid and substantiated in their beliefs. But I really think this is the basis of education. In order to really be solid in your opinions, you want to know that you’ve sort of poked and prodded them and kicked the tires a bit, all the way around.”

Schonberg adds that this manner of dialogue through differences is an important life skill, one that is now sorely needed.

“To listen,” he says, “in a respectful way, to people you disagree with is something you’ll have to do throughout your life. You won’t be able to solve many problems if you’re not able to take in a lot of different perspectives and be clear about your own values. Laurentians want to be self­aware, to collaborate with others, even when we disagree. That’s always been important and it’s been part of what we’ve done for students here. Throughout history, it can seem more urgent. I think we’re in one of those moments when it’s in high demand.”

For more information about the program Fostering Civil Discourse in Political Conversations, Learning for the 21st Century or The Power of Connections, please contact Terri Selby, executive director of major and planned gifts: tselby@stlawu.edu or (315) 229-5542.