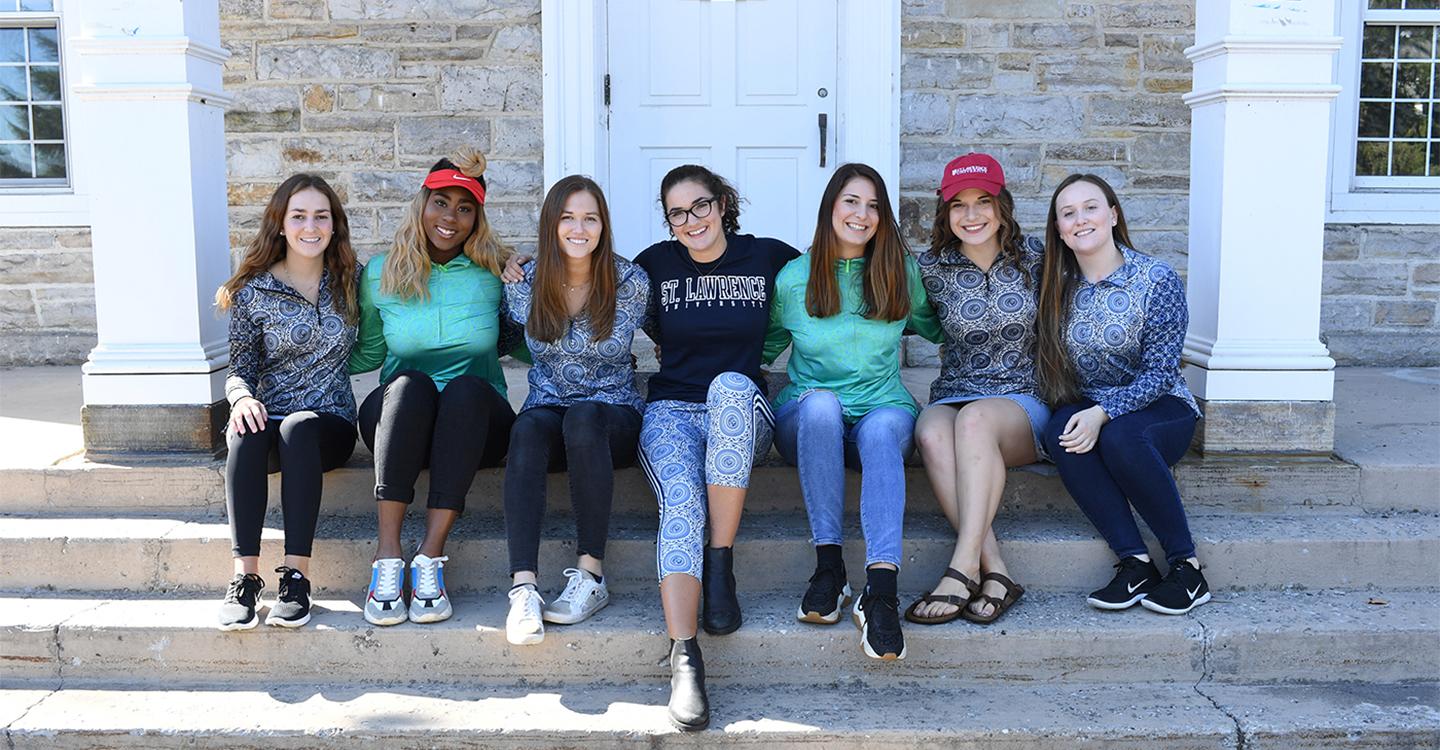 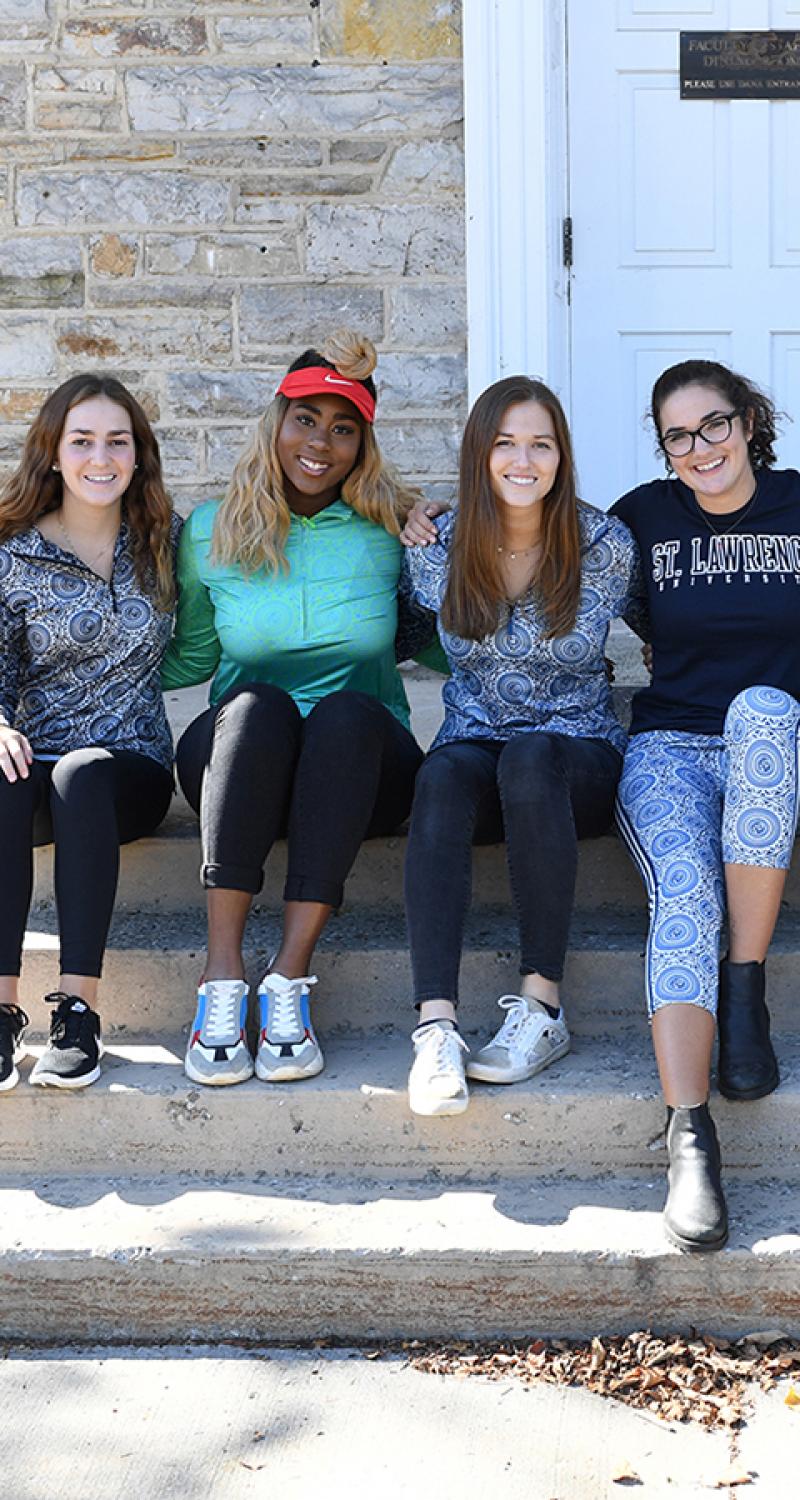 How Gretchen Scott ’72 is generating scholarship funds through her St. Lawrence–inspired activewear collection.

Scott has developed a unique fundraising strategy by donating 100 percent of the proceeds from this print used on zip-neck pullovers and matching leggings to fund Georgie’s Scholars, a scholarship for North Country students attending St. Lawrence, honoring her father, George Sturtz ’49.

“This scholarship fund is an extension of my father’s work,” Scott says. “He was a pediatrician and created the North Country Children’s Clinic serving the region’s neediest children.” She remembers her father as a scientist, physician, and scholar, but most for his unending love, fun, and intellect.

Scott’s career has run the gamut from working for a Washington, D.C. lobbyist to being an advertising manager at Conde Nast before launching her own brand of clothing, accessories, and home décor. Her business  with over 70 employees has grown to include an online sales presence, four domestic stores, and distribution in over 1,000 independent retailers worldwide.

Parallel to the growth of her business, Scott has also expanded her philanthropic reach. Her support of numerous charities and organizations represent Scott’s commitment to a variety of communities and causes, and includes donations to the Weill Cornell Pediatric Brain and Spine Center; Loggerhead Marinelife Center (a sea turtle rehabilitation, research, and conservation center); Janada L. Batchelor Foundation for Children (a Tanzanian orphanage for abused and abandoned girls); and ME STRONG (a community dedicated to supporting individuals and their families battling cancer). The Georgie’s Scholars program is just the latest in Scott’s strategies to support future generations. 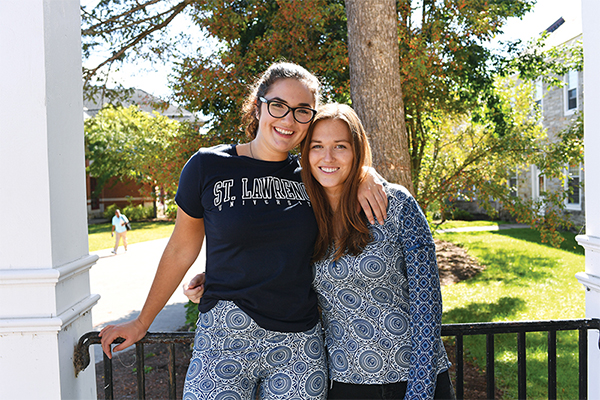 Students model the designs available for purchase through both the gretchenscottdesigns.com online store or brewerbookstore.com. One hundred percent of the proceeds from sales of Gretchen Scott’s Herring Cole Rose window print athleisure collection goes to support Georgie’s Scholars.

Scott says the idea of designing a print for an athleisure line to support Georgie’s Scholars originated at a gathering of Laurentian women.

“I was speaking and an alumna asked me if I might consider doing something like this,” she says.

“The design concept came from the stained glass in Herring-Cole,” she says. “So, yes, the clothing, the design, giving back, donating 100 percent of the proceeds, and honoring my father and his work and legacy—all these threads run through St. Lawrence University.”

“It goes way beyond Laurentians. The design intentionally has universal appeal,” Scott says. “Whether or not the buyers have a connection with the University, the clothes work.”

The inaugural Georgie’s Scholars have been awarded to two students: McKailey Lyndaker ’21 and Tasia Nelson ’21.

Lyndaker is a major in biophysics with a minor in mathematics and is working toward earning a degree in engineering management.

“Without this funding, I couldn’t attend St. Lawrence,” says Lyndaker. “Because of Georgie’s Scholars, I’ve been able to make the most of so many opportunities here: studying for a summer abroad in Denmark, playing on the varsity softball team, joining the Chi Omega Sorority, and helping people in Canton through community service.”

Nelson agrees. “Without this funding, I would never have been able to explore my interests as much as I have here at St. Lawrence.”

Majoring in neuroscience, Nelson points to the funding from Georgie’s Scholars as key to her own self-discovery.

“My coursework at St. Lawrence and my experiences here have shown me who I want to be,” she says. “So many of my fellow Laurentians, my professors, advisors, and other students, have helped me identify—and reach—my goals.”