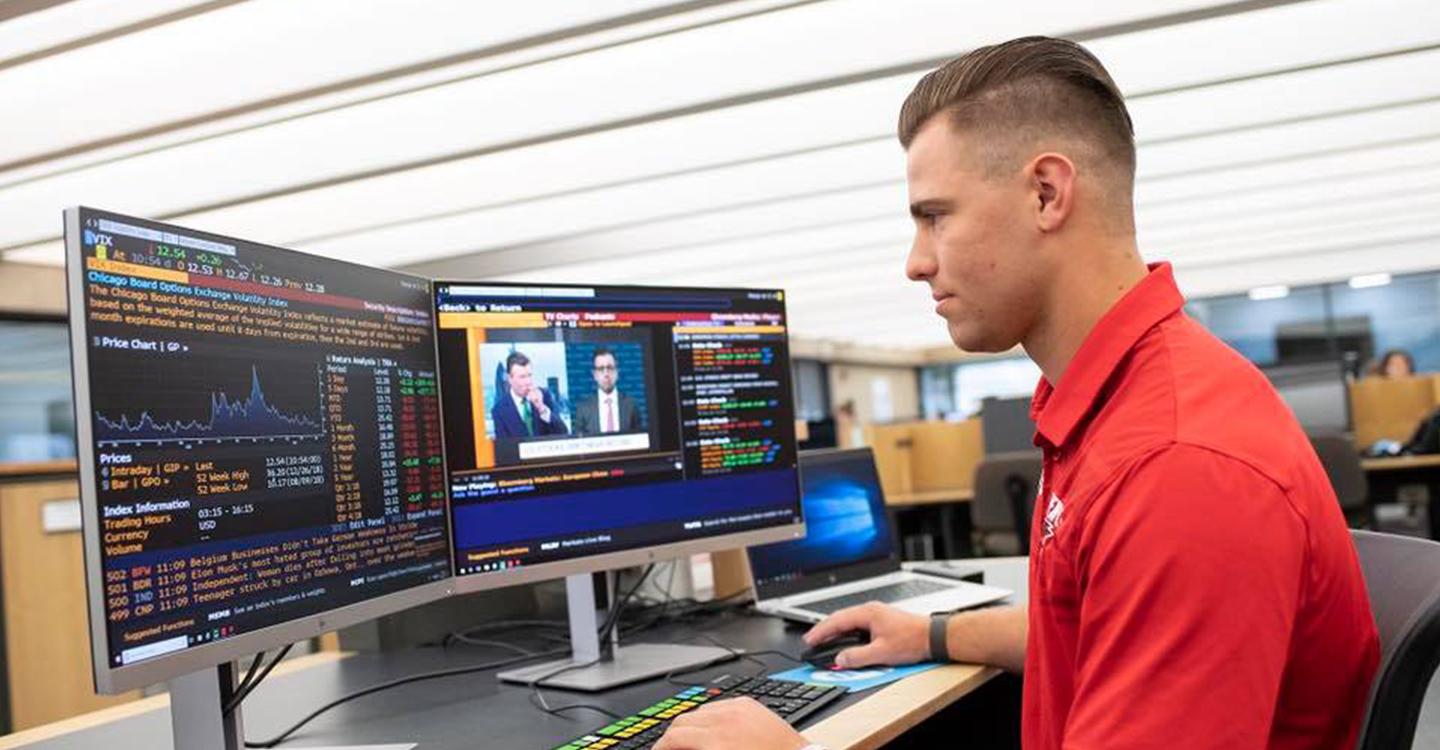 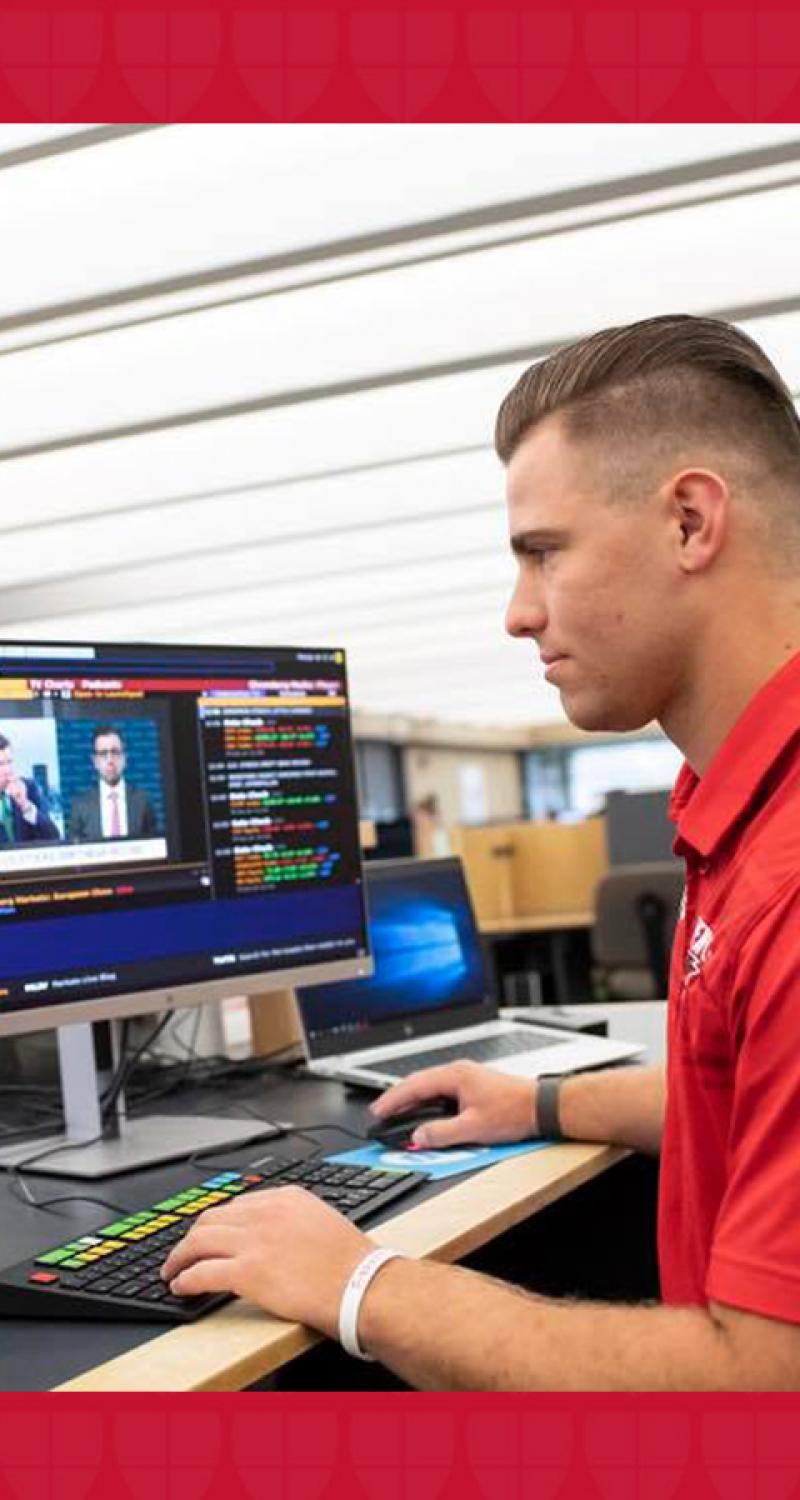 Buy Low. Sell High. Give Back.

How St. Lawrence got a Bloomberg terminal on campus.

“What’s a good thing to do for St. Lawrence, for the University’s future?”

Bobby Gates ’19 asked this question during his senior year at St. Lawrence, which was also his third year with Northwestern Mutual.

“I interviewed with the company in the fall of my freshman year,” he says.  “I was motivated to get into finance and got an offer in December 2015.  I started as a summer intern the following May.”

Since then, he simultaneously earned his degree, majoring in economics and mathematics, and worked for Northwestern Mutual.  This shaped the answer to his question, “What’s a good thing to do for St. Lawrence?”

His answer: getting the University a Bloomberg terminal.

It’s a computer with highly specialized technology.  For those working in the financial services industry, it’s a staple.  By using this terminal, a trader in San Francisco or Canton sees what’s happening on the floor of the New York Stock Exchange (or just about any other financial market) in real time.  That’s the same time as someone actually standing on the trading room floor.  The terminal can also be used to buy and sell stocks, again, in real time.

For these reasons alone, Bloomberg terminals are costly.  What’s more, they can’t be bought, only leased.  Still, Gates believed it was vital that the University have one.

Then, he learned more about The Campaign for Every Laurentian, including the push to support Learning for the 21st Century.  It’s one of the Campaign’s “Big Ideas,” determined by talking with faculty and students about those things that are both needed and can make a big, positive impact on the student experience.

Professors across several disciplines – math, economics, government, computer science, data analytics, and business in the liberal arts – pointed to the need for advanced technology that can give students voluminous, specialized information and the experience of working with it.  A Bloomberg terminal provides all this while furthering the University’s ability to conduct research and other academic work.

This was significant for Gates.  He saw the needs of the University aligned with his own interests.  Because of his commitment and generosity, there is now a Bloomberg terminal up and running – and in high demand – in the Owen D. Young Library on campus.

“I’ve provided the seed funding to secure it for two years,” Gates says, “but St. Lawrence needs this funding to grow.  If the University gets enough financial support to run three terminals, Bloomberg will give St. Lawrence nine more subscriptions at no extra cost.”

Gates believes other Laurentian alumni in the financial services industry should be a primary source of this additional funding.

“I want to tell alumni that I’m doing this,” he says.  “Now that it’s here, let’s grow this.  Let’s get excited about it.  The students want it, the faculty appreciate it, and a lot of alumni on Wall Street say this is absolutely crucial for graduating seniors if they want to go into finance.”

By all accounts, “absolutely crucial” is exactly right.

Investopedia.com calls the Bloomberg terminal, “one of the most heavily used and highly regarded professional investments systems to be created for the financial marketplace.”

There are other aspects to these computers that are less well-known, but extremely valuable.  While Google and similar websites are called “search engines,” the Bloomberg terminal is a “research engine.”  Name a topic, profession, or organization and this computer can retrieve all the information of a search engine, plus proprietary data from Bloomberg and other sources.

As the Charles A. Dana Professor of Economics at St. Lawrence, Cynthia Bansak sees great potential for these computers as tools for learning.

“A Bloomberg terminal can give you a lot of information about financial assets and investments,” she says.  “There’s an overwhelming amount of data, but there are also statistical analysis tools, as well.”

Bansak has already seen how the terminal allows faculty to take the theories they’re teaching and test them, in order to show how financial and economics data are responding to world events.

“I teach practical, real-world classes that depend on experiential learning.” She says.  “I teach classes on the Federal Reserve, another on banking, and an introduction to financial analysis.  I can teach theory and talk about different theoretical models.  Using the Bloomberg terminal, my students and I can look at data in relation to these theories and models.  Sometimes, they hold, other times they don’t.  We’re able to see all this in new ways – and much fast.”

It is not rare for a St. Lawrence student to make a financial gift of this magnitude to St. Lawrence University.  It’s unprecedented.

“I thought through it,” Bobby Gates says.  “I’m very fortunate to have family and a great office culture that stress the importance of giving back.  This is a way to open doors.”

“For St. Lawrence students and faculty,” he says, “this is access to more knowledge and the kind of professional aptitude that’s in high demand, partly because it’s so rare.”

Gates says the other door is for St. Lawrence alumni in financial services.

“Every Laurentian working on Wall Street can contribute to this,” he says.  “We know how important these terminals are to the success of St. Lawrence students.  This is our alma mater.  This is our industry.  We know the value of giving back and we know the returns on this will be multiplied hundreds of times over.”

To learn more about Learning for the 21st Century, the push for more advanced technology on campus or to support it, click here or contact Terri Selby, executive director of major and planned gifts: (315) 229-5542 or tselby@stlawu.edu.