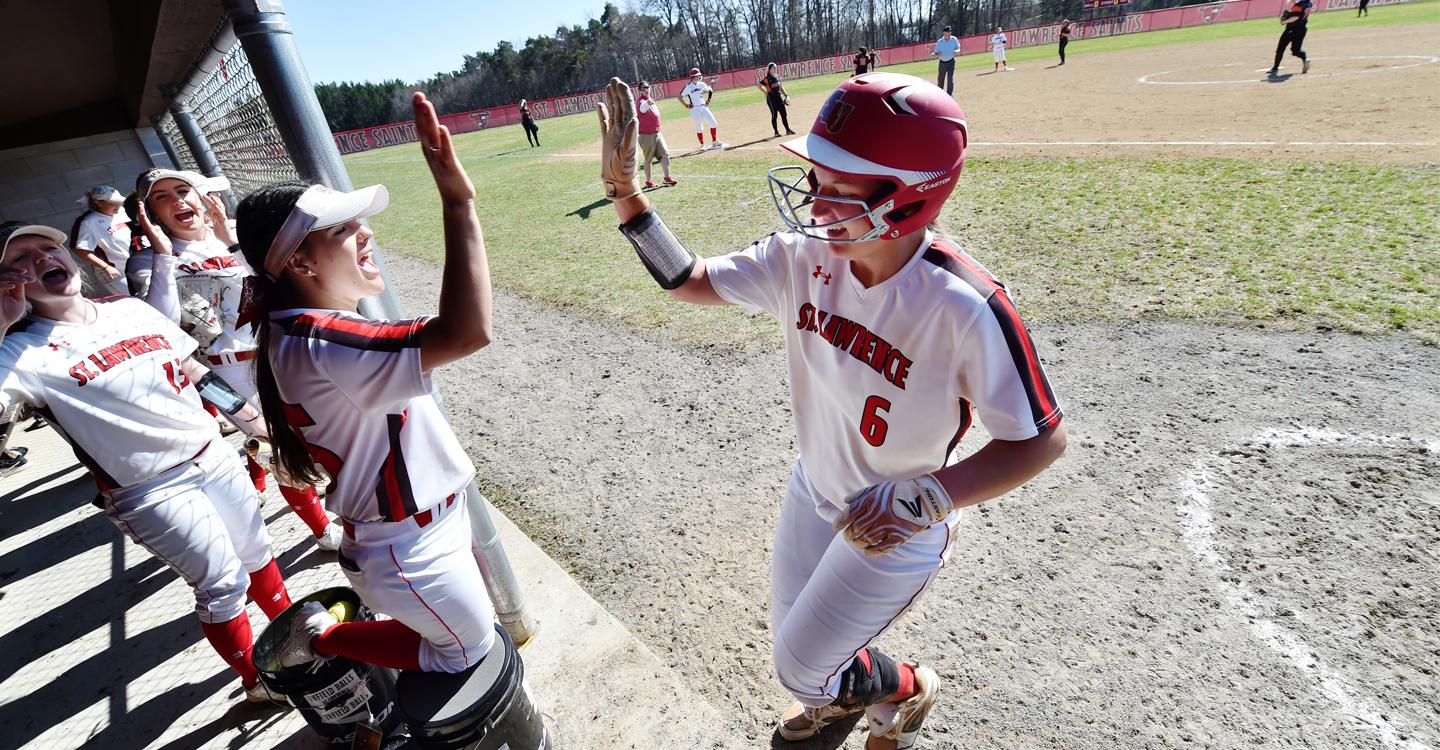 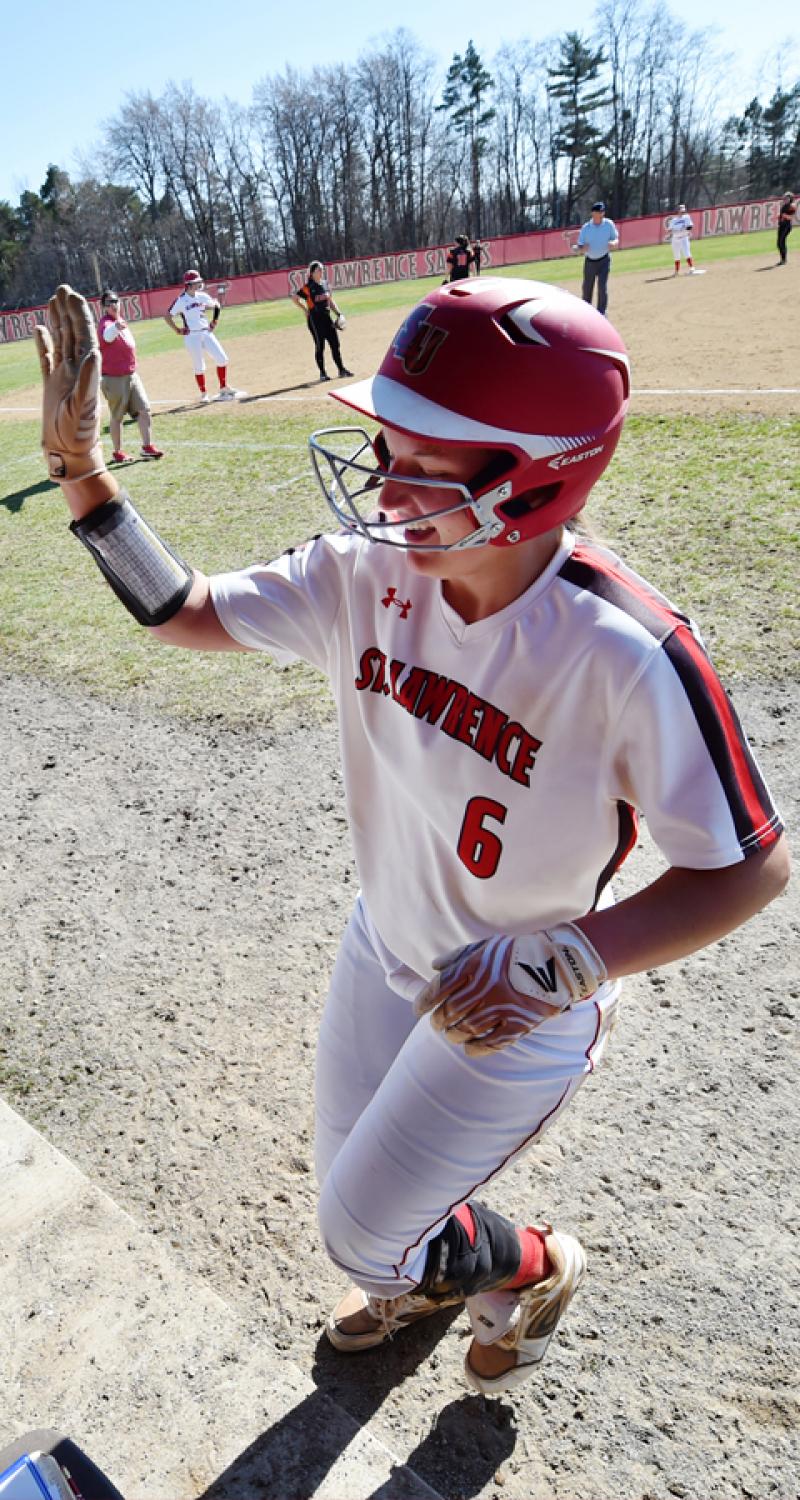 Building a Team and a Community Far From Home

The St. Lawrence University softball team has a roster of players from all over the country, and head coach Elisa Van Kirk wouldn’t have it any other way.

Elisa Van Kirk, now in her sixth year as St. Lawrence’s head softball coach, has been scouting players at a showcase tournament in Colorado for several years. The tournament draws nearly 1,000 teams with roughly 10,000 players who are interested in playing softball in college. Covering all that territory to find players that will be a good fit at St. Lawrence is a 14-hour grind for four straight days.

“When I got back from Colorado this past summer, I was so dehydrated that I passed out,” says Van Kirk. “I was in the hospital and in between tests, I was on the phone with a recruit.”

Van Kirk’s dedication to recruiting has yielded a team with a diverse geographical background. Her 16-player roster consists of two New Yorkers, three New Englanders, three players from southern states, one from Arizona, six from the West Coast, and one from Alaska.

Once recruits from far-flung locations land on campus, they find a community that is ready to embrace them and help them brave the challenges they face as students far from their homes.

“Being a member of the softball team here means you’re part of a family,” says Elle Gray ’19, a native of Sitka, Alaska. “Most of our first-years last year were all so far from home. So, we kind of made a little mini-community of long-distance people here on campus, and that feels fantastic and you feel really supported.”

“I looked at bigger schools, like Boston College,” says Caitlin Syphurs ’20, who came to  St. Lawrence from Sierra Vista, Arizona. “Being at a small school like this, when you go to the dining hall, you see someone you know. Everywhere you go you see someone you know and you don’t feel lonely or distant or anything like that here.”

Van Kirk’s strategy has not only built a strong community; it has also led to success on the field. In 2017, the Saints tied the program record for wins in a season, going 22-11, and shattered the school record for runs scored in a season with 206. The previous record was 174.

Each year, Van Kirk comes home from the Colorado showcase event with a list of about 2,000 players she thinks could play at St. Lawrence. She sends an introductory email to every one of those players, following up personally with phone calls and weekly emails to the 100 or so that expressed interest in St. Lawrence.

“Those messages almost never have anything to do with softball,” says Van Kirk. “I send links to stories about the St. Lawrence alumni network or the study abroad programs at St. Lawrence. My favorites are a story written by a student called ‘How Chocolate Milk Changed My Life,’ and an interview with (Dan Buckley ’89), who is one of the leading executives with Marvel Comics.”

For the Class of 2020, Van Kirk had 10 recruits come for campus visits. Nine of those 10 ended up enrolling.

“I had a recruit in my office, and I was encouraging her to apply early decision,” says Van Kirk. “She said she wanted to go home and think about it, and I told her I understood it was a big decision and that she should take her time.”

Fifteen seconds after leaving Van Kirk’s office, the student knocked on her door and said, “‘Coach, I don’t need any more time. St. Lawrence is where I want to be.’”