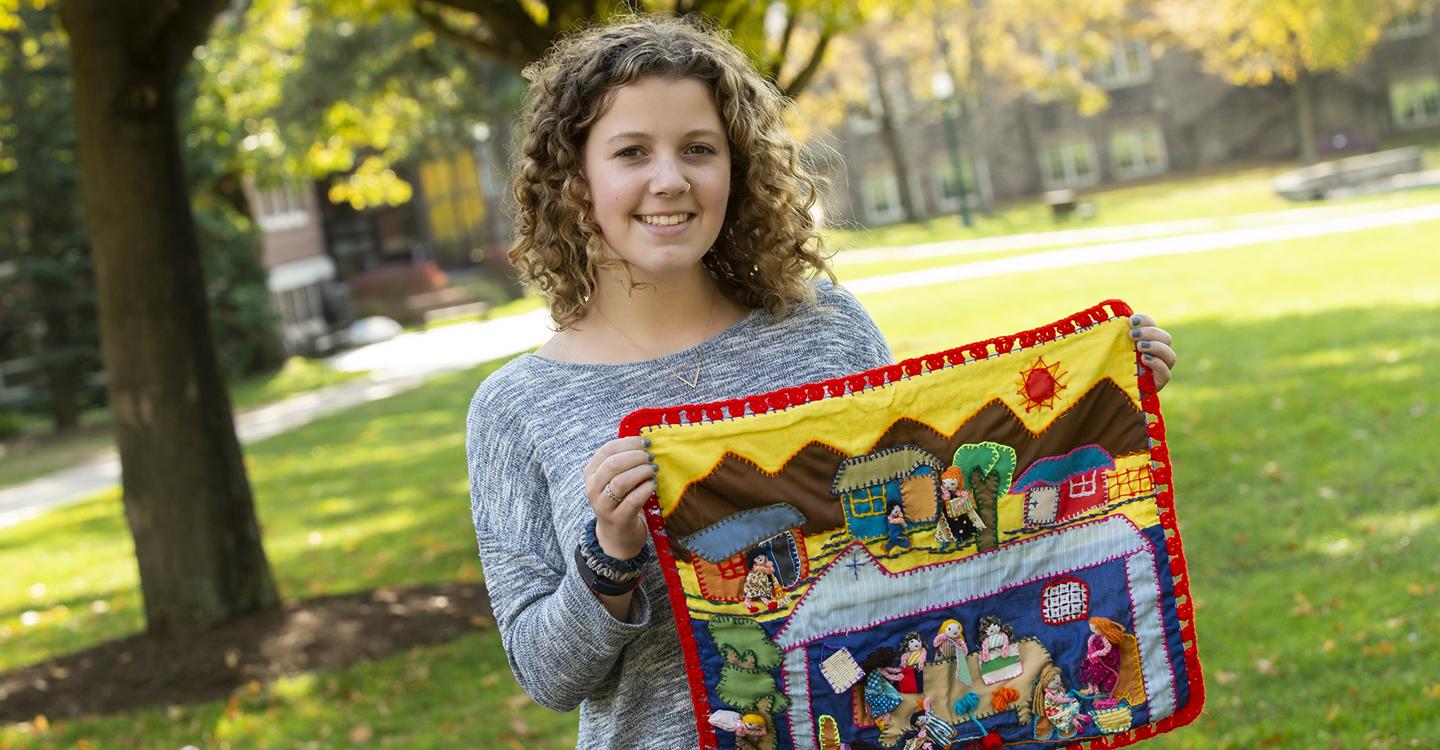 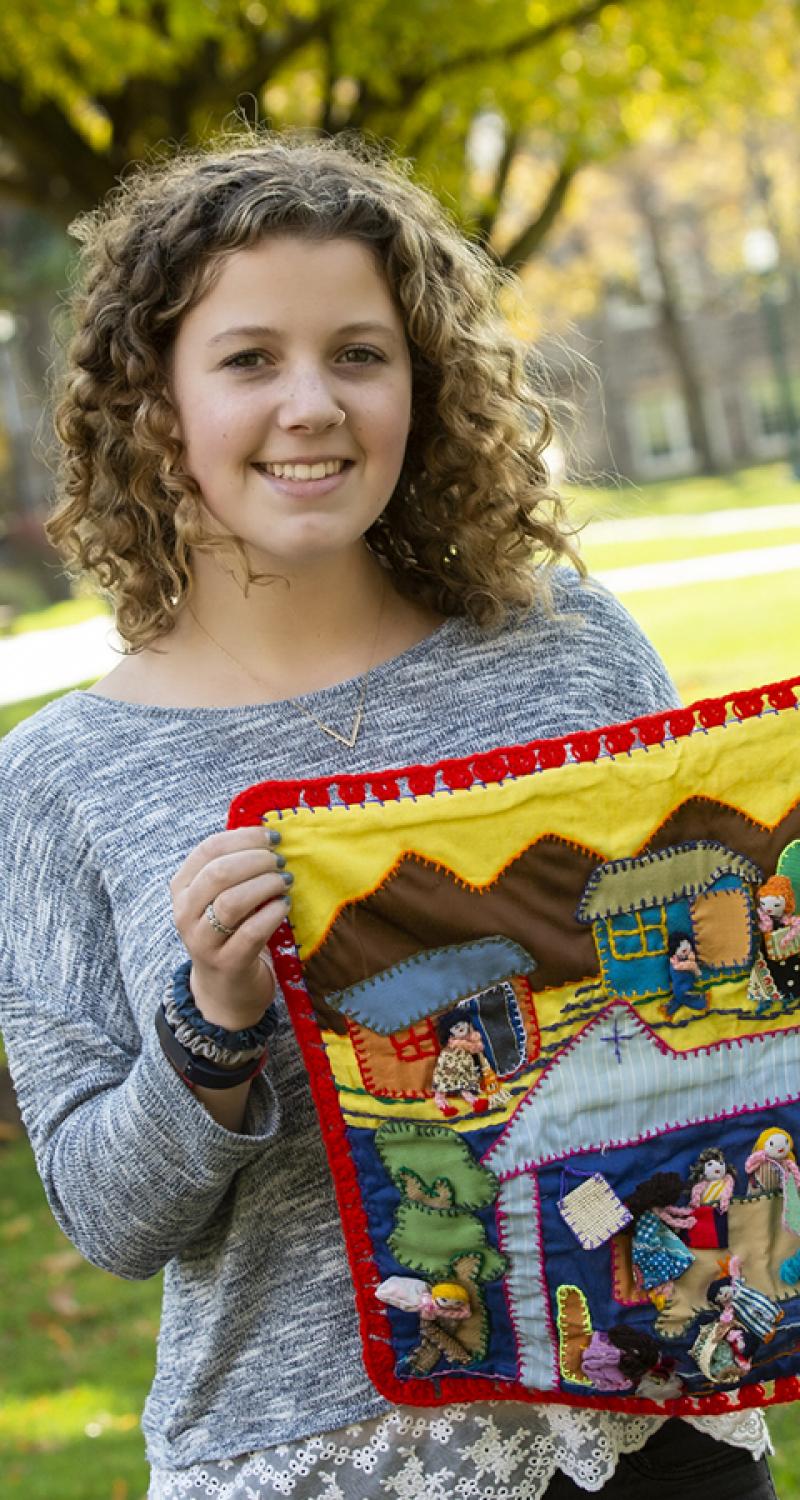 In January of 2018, my professor and advisor Tamara Feinstein sent me an email asking what my plans were for the upcoming summer. I told her I didn’t have any major plans, not thinking too much into what she might offer. Little did I know, I was about to become part of a long-term research project on the arpillera movement during Augusto Pinochet’s dictatorship in Chile. After submitting a proposal for St. Lawrence’s CIIS-Fellows Program to receive funding for a research trip to Chile, I found out about a month later that our proposal was accepted, and we began planning for our trip. I sat in on Professor Feinstein’s “Cold War in Latin America” course during her unit on Chile to learn about the country’s history, and spent the rest of the semester learning how to use video equipment, how to be an interviewer, how to write consent forms, and even got to give my first interview in Canton to SUNY Potsdam Professor M.J. Heisey, the ex-director of Jubilee Crafts, who initiated the arpillera exhibit project.

Our project, titled “Forging Memory: Chilean Art and Politics,” began when Professor Heisey learned that a collection of arpilleras had been sitting in a Jubilee Crafts co-worker’s basement since the fair-trade women’s collective closed in the 1990s. Arpilleras were hand sewn patchwork tapestries crafted mostly by women during the Pinochet dictatorship as a form of protest art and a means to earn an income. Professor Heisey wanted to find a way to once again display the arpilleras for educational purposes, as they originally had been intended at Jubilee Crafts. She reached out to fellow SUNY Potsdam Professors Lily Trevizan and Oscar Sarmiento, who had lived through the dictatorship in Chile and were very excited to help develop the project. Together with Professor Feinstein, who works at both St. Lawrence University and at SUNY Potsdam, they decided to create an exhibition at both schools in the spring of 2019 to display the arpilleras and the history that goes along with them. The exhibit materials will be donated to the Museum of Memory and Human Rights in Chile after the exhibits close.

On July 20th, I boarded a flight to Chile, where I was to meet Professor Feinstein and SUNY Potsdam student Ryan Hutchins. When we arrived, Professor Feinstein had already begun organizing the eight oral history interviews we would record over the next two weeks. The night before each interview, we spent an hour or two reading about and designing questions for our interview subjects, who ranged from museum employees to arpillera makers during the dictatorship to family members of the disappeared. Our interviews lasted anywhere from one to four hours and took us to different regions of Santiago. At times, the mood of our interviews became very tense as it was difficult to hear the pain in the voices of interview subjects whose loved ones were disappeared. Nonetheless, the interviews we collected provide important historical and social context for the spring of 2019 exhibits. While in Chile, I was able to share our work for a week through St. Lawrence’s @herewegosaints Instagram account. This allowed us to connect with the St. Lawrence community and offer a glimpse of our work to a larger digital audience.

We also visited memory and torture sites in Chile, where we saw and learned about the harsh abuses committed by Pinochet’s dictatorship. Among these were La Moneda, Londres 38, Villa Grimaldi, the National Stadium, the National Cemetery, and the Vicaría de la Solidaridad. La Moneda is the Chilean equivalent of the White House, which was bombed in the military coup led by General Pinochet against democratically elected President Salvador Allende on September 11, 1973. Londres 38 was a socialist office building which became one of many torture and detention sites for opponents of Pinochet’s dictatorship. Villa Grimaldi was another torture and detention site which was confiscated from a socialist party member during the dictatorship. After the transition back to democracy, Villa Grimaldi was converted into a public park where people can pay tribute to those who lost their lives there. The National Stadium is the largest sports stadium in Chile and was also one of the biggest torture sites directly after the coup. We toured the stadium and saw where prisoners were held and beaten, as well as photos taken by reporters who were inspecting the stadium for use by FIFA. The National Cemetery is home to the graves of many public figures who lost their lives during the Pinochet dictatorship, such as Salvador Allende and Victor Jara, a Chilean musician who was killed gruesomely while detained at the Chile Stadium. Lastly, we visited the original site of the Vicaría de Solidaridad and its current location today. Santiago Archbishop Raúl Silva Henríquez formed the Vicaría with the protection of the Catholic church during the dictatorship. The Vicaría was fundamental in helping organize women interested in creating arpilleras and in exporting arpilleras abroad. The Vicaría’s archive now houses important documents from the dictatorship and continues to be an important resource of documentation for other researchers.

Since returning from my trip to Chile, I have begun to sort through the materials we collected. I took photos and used a GPS tracker to pinpoint the exact location of each photo and will be working with St. Lawrence’s GIS department to create an interactive story map for the project’s website, as well as a physical hardcopy map for the exhibition. The interviews we facilitated need to be edited and translated for the exhibit, and I will work on a few of these myself with help from St. Lawrence’s technology department. My opportunity to participate in this project has introduced me to a number of skills that I hope to continue to develop in the future. Nine months ago, I had no idea I would be involved in such a powerful educational project, and I am excited to continue to be a part of this process and see where it takes me.